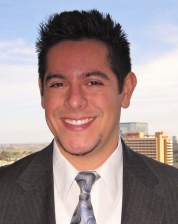 May 17, 2012 (San Diego) – With Nathan Fletcher leaving the Assembly to run for Mayor, the race is on till fill the open seat.  Democrat  Ruben “R. J.” Hernandez is among four candidates seeking to represent the newly redistricted 77th, which include inland communities such as Tierrasanta, Scripps Ranch, Poway, and Rancho Bernardo and as well as areas as far west as Del Mar Heights.

View a map of the new district: http://www.co.san-diego.ca.us/voters/Eng/maps/AssemblySDCountyMap.jpg

He adds, "My first job was a government job, helping people find work. Since then I’ve created budgets, closed millions of dollars in negotiated deals and served as a liaison to bridge competing interests.”

A small businessman and certified peer educator, Hernandez’ work experience includes management, sales, and small business creation—including a construction company. He has also worked as a laborer, as did his parents, who emigrated to the U.S. from Central and South America.

“I’ve lived the American dream and I know how to promote it. And so, too, have I experience hard times during the recession and survived,” states Hernandez, who has experience a job-layoff and seen many neighbors at his former Murrieta community lose their homes to foreclosure.  He is currently a resident of 4S Ranch in northeast San Diego County and has lived in the county for the past eight years.

Unlike most politicians who want to either cut expenses or raise revenues, Hernandez has ideas to accomplish both.

He believes in a fair tax system that includes closing loopholes for corporations that pay no taxes, while rewarding companies that invest in the state and create jobs by allowing lower taxes.

He wants to cut the income tax for the middle class and reduce negative impacts of foreclosures on credit records.  He aims to cut costs for California by consolidating and levering economies of scale, stop outsourcing and rebuild reserves.  To help businesses, he wants to eliminate the minimum franchise tax and streamline some regulations He praised Fletcher for a bill that made it easier for craft brewers in San Diego to add tasting rooms.

To raise revenues, he supports an oil severance and a mineral severance fee. “Oil and mineral companies shouldn’t just be able to pillage and plunder. I don’t like taxes and I’m for cutting state income tax, but I’m not for no-new-tax pledges.  I believe the Governor’s tax plan is our best shot at jump starting our revenues.”

He also wants to incentivize universities to be “revenue generators” as core centers of research and development.

He denounces tuition hikes at a time when California State University has hired a president at SDSU for a $400,000 salary.  “That is adding insult to injury,” he said.

He has a pension plan to cap “golden parachute” pensions for long-term sustainability while protecting most workers’ pensions.

On the labor side of the aisle, he has lobbied with the U.S. Student Association and was part of a movement at University of California fighting for teachers’ assistants’ collective bargaining rights, according to his website. He has also served as a human resources consultant for Riverside County.

Unlike some candidates who run on vague slogans with little substance, Hernandez says he has developed a series of specific plans. For instance, he touts a fire prevention and public safety plan to police defensible space, speed up response time, and expand firefighters and police access to resources.

He faults one of his opponents, former Councilman Maienschein for leaving San Diego vulnerable to devastating wildfires.  “The fires wouldn’t have been as bad if we’d had more fire stations,” he said, noting that Rancho Bernardo had less than the minimal standard recommended by the U.S. government.  “I want to utilize civil air patrol to fly overhead and monitor areas.”

He staunchly opposes the controversial fire parcel fee.  “I am completely against that fire parcel tax,” he said, adding that he believes fire and police protection are core services that should be provided to everyone.

He criticized SDG&E for its attempt to charge ratepayers for wildfires that it caused.  “We should have a bill to protect ratepayers from being charged for fires and disasters,” he proposed.

“There is a definite attack on women’s rights and what to do with their own bodies, which is absolutely unacceptable,” he observes. He opposes cuts to Planned Parenthood and notes that many women, including his fiancé, rely on the organization for basic healthcare such as key health screenings.  “We have senators in other states saying these are all abortion clinics; that’s absolutely false.”

He has multiple family members who have served in the military and wants to make helping military families and veterans a priority in the district, which includes the Miramar military base.  “Veterans’ homeless is a key issue,” he told ECM.  “So is helping veterans adjust from military wartime to peacetime, contributing to community and work and family.”

On healthcare, he brings firsthand experience to his views.  “I was hospitalized for mengitis four months after I secured a job,” he recalled. “Had I not had any insurance, I had tens of thousands in medical bills.” While unemployed, he paid for healthcare insurance but had poor coverage, he added.

He denounced state cuts in services such as in-home care providers for the elderly and disabled.  “To punish people who are unable to care for themselves is cruel and unusual punishment,” said Hernandez, whose fiancé works in home healthcare.

He wants to see more regulation of predatory lending and wants to bring back the Home Help Program, which assisted local homeowners with home ownership by covering some closing costs.  “Fletcher helped to defund that,” he noted.

Hernandez  would like to put people to work on infrastructure, as well as building solar panels.  “We could create jobs and put people to work and at the same time have energy companies running scared,’ said Hernandez, who voiced concerns over massive desert solar and industrial wind projects that have negative environmental and health impacts.  “If we can cut the cost of solar panels, we can put them everywhere.”

His solar plan ranges from vertical space such as skyscraper windows that double as solar panels to encouraging rooftop solar. “People should have the opportunity to earn money off that and have ownership—to actually compete with SDG&E,” said Hernandez, who describes himself as pro-environmental while also understanding construction as a small business owner and builder.

He added, “I have taken no money from SDG&E.  We are not being funded by single special interest.”

For more information on his candidacy, visit www.rjhernandez.org.

ECM has also interviewed Dustin Steiner http://eastcountymagazine.org/node/9855, and has requested interviews with the remaining candidates.

Meanwhile people can read more about Hernandez and all other candidates in the race at http://votesmart.org/candidate/138427/rj-hernandez