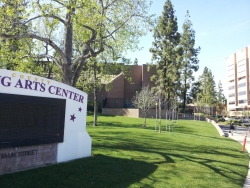 ECPAC Foundation, SAVE ECPAC groups  plan rally to save theater at 1 pm;  workshop at 2 p.m.; Council meeting at 3 p.m.

May 22, 2012 (El Cajon ) – Today at 1:30 p.m., the El Cajon Council will hold a special workshop on the future of the East County Performing Arts Center.   Council has given an exclusive 180-day agreement to a developer to propose plans for tearing down the theater and building a hotel.  Today, developer E. Neal Arthur will present his plans at the workshop.

Then at 3 p.m., Council will consider the workshop findings and may opt to take action.

A group forming a new ECPAC Foundation has announced plans to hold a “Save ECPAC” rally at 1 p.m. outside Council Chambers in conjunction with other concerned citizens.

Supporters of the arts are encouraged to bring signs to demonstrate support for keeping the theater open.

The theater has been dark for two years, closed for a remodeling that never took place.  The City estimated the building needed up to $4.5 in renovations, but that included a “wish list” of non-essential items such as moving the entrance onto Main Street and adding more restroom stalls.

In a recent tour provided by City staff, a coalition of community leaders learned that the theater could be reopened for an investment of only about $250,000 to repair a leaking roof ,  fix a dangerous lighting situation,  cleanup and other essential matters.

While claiming it could not afford to reopen the theater, the City meanwhile has expended around $2.5 million on landscaping upgrades including revamping the duck pond outside the theater, as well as around $1.3 million on remodeling the Prescott Promenade.

Given that the theater has long been positioned as the cultural heart of East County and a draw to boost business for downtown El Cajon as a cornerstone of economic revitalization, many now question the wisdom of expending such huge sums on largely cosmetic improvements to the detriment of the long-term future of the arts in East County.

The City has in the past contended that in addition to repair costs, an operational deficit would need to be covered as well to continue theater operations.

In other venues, however cities provide financial support for performing arts centers that are publicly owned. In addition, critics have contended that  professional management, a better mix of performances, improved event marketing including internet and social media, and sale of alcoholic beverages could all boost revenues and help make the theater economically viable.

Tearing it down may not come cheaply; estimates have indicated a $2 million demolition cost.

But thus far, City Council members and the Mayor have publicly shown intent focused on destroying the theater, ignoring public sentiment from those who seek to save it.