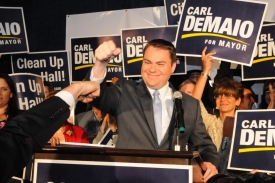 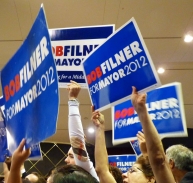 Carl Demaio, a conservative Republican and former councilmember, in his victory speech at the U.S. Grant Hotel , said that “Citizens have shifted the city into drive and put their foot on the gas.”  He pledged to “finish the job of fiscal reform”  by implementing Propositions A and B, as well as fixing “roads that are falling apart.”

Congressman Bob Filner, a liberal Democrat and former Deputy Mayor of San Diego, faulted DeMaio for focusing on “a pothole somewhere” while lacking a positive message for voters.  “I want to talk about a vision of the future of what can be a really great city,” Filner told media at Election Central. Both are noted for their at times combative campaign styles. (Filner once showed up sporting a pair of boxing gloves at a forum for Congressional candidates. DeMaio launched a series of hit pieces aimed at torpedoing the campaign of his more moderate opponent, Nathan Fletcher.)

In a message to supporters earlier on Election Day, Filner pledged to lead San Diego in living up to its slogan  as America’s Finest City.  “We need to elect a mayor who will work every single day to create jobs and bring new businesses to our city by focusing on expanding our port and making San Diego the clean energy capital and job creating capital of the country,” he said.  “A mayor who will invest in our neighborhoods and redirect city resources away from downtown and into all of the communities that make up the city we love. “

DeMaio has staked his claim to leadership by focusing on slashing costs for the city. He was an architect behind Prop B, the ballot initiative that eliminated guaranteed pensions for city workers, instead shifting  most new employees into riskier 401k-style retirement plans. In 2010, he pushed for an initiative to outsource many city jobs; that measure failed.

Backed by a coalition of conservative groups including the San Diego County Taxpayers Association, the Republican Party and the Lincoln Club, a group that promotes a pro-business legislative agenda, DeMaio has drawn praise from such groups for his fiscal policies while earning criticism from unions and educators for his slash-and-burn stances on public employees and middle class jobs.

Filner drew a sharp contrast between himself and DeMaio.  “Every day we need to keep in mind who we fight for—middle class San Diegans and not the powerful downtown special interests.” A former teacher and San Diego Unified School Board president, Filner has also said he would make it a priority for the city to forge partnerships to help the district as it teeters on the brink of insolvency; he has faulted DeMaio’s backing by groups seeking to defund and privatize public education.

San Diego hasn’t had an elected Democratic mayor since Maureen O’Connor left office in 1992.  The city has shifted “blue” in its registration, with more registered Democrats than Republicans.  Still Filner will face a tough challenger despite DeMaio’s hard-right stances. 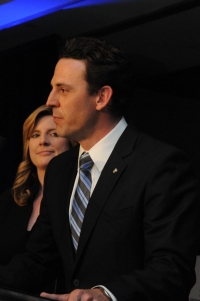 The top four contenders in the mayoral race collectively drew over 99% of all votes, despite a long list of candidates on the ballot.   With 100% of precincts counted and 135,000 provisional/absentee ballots remaining,  conservative Republican Carl Demaio scored 32.11% of the votes, nearly even with liberal Democrat Bob Filner at 30.11%.  Asssemblyman Nathan Fletcher, who renounced his Republican party membership  shortly before the election, drew 23.98%, followed by District Attorney Bonnie Dumanis, a Republican, at 13.10%.

Both Filner and DeMaio are noted for their tenacious, scrappy styles on the campaign trail.  “If current Mayor Jerry Sanders reminds you of your kindly uncle, then DeMaio and Filner are your cranky cousins,” Voice of San Diego’s Liam Dillon observed.

To win, DeMaio will be banking on his bankroll-hefty donations from the Republican Party and well-heeled backers. His campaign has taken large sums from developers and the hotel industry, among others.

Filner is counting on a strong boots-on-the ground campaign of precinct walking, with help from labor and the Democratic Party, to bring his reform message to voters.

Turn-out in yesterday’s election was light, not surprising given that both the Republican and Democratic presidential primaries were already decided before Californians voted.  In November,  the Presidential race is expected to bringing out stronger turnout as voters flock to the polls to support President Barack Obama or his GOP challenger, former Massachusetts Governor Mitt Romney.

Primary voters tend to be more partisan than those voting in general elections, hence the choice of the top-two contenders in San Diego’s Moyoral race coming from the progressive wing of the Democratic Party and the far-right wing of the Republican Party.

Come November, however, the outcome in San Diego’s officially “nonpartisan” Mayoral race may hinge on independent and moderate voters—so watch for candidates to tack toward the middle in their efforts to woo both voters who supported other candidates in the mayoral primary as well as motivating apathetic city residents who did not vote in June.