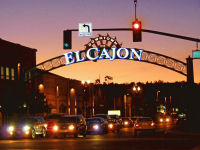 December 13, 2012 (El Cajon ) -- Since 1955, El Cajon's civic, service, and fraternal organizations have helped to select an El Cajon “Citizen of the Year” from the many people in El Cajon who contribute to the city through years of volunteer civic and community service. Anyone may make a nomination for this year's Citizen of the Year award by the December 21, 2012 deadline. This award is for volunteer (un-paid) service to the community which benefits the city and residents of El Cajon.  Applicants for El Cajon Citizen of the year need not live within the city limits of El Cajon, but must live in East County.

Nominations should be on the basis of volunteer civic and community activities in El Cajon over the years. That portion of the nominee’s civic and community activities for which he or she received compensation will not be considered by the Selection Committee in determining the Citizen of the Year.  Any person actively seeking a public political office during the time of the selection process will automatically be disqualified as a nominee for Citizen of the Year.  To request an application, please call Drum Macomber at (619) 442 5313.

The 2012 El Cajon Citizen of the Year and all nominees will be honored at a luncheon on February 26, 2013, at the Ronald Reagan Community Center.  The public is invited to join in this celebration of community service by making your nomination at the event and honoring all those who serve the city.