December 23, 2015 (North Pole) – While Santa and his elves are busy preparing for their annual journey delivering gifts to children around the world, The North American Aerospace Defense Command (NORAD) has announced it will track Santa’s Christmas Eve flight once again for the 60th consecutive year.

On NoradSanta.org you can follow along as NORAD provides video tracking of Santa’s destinations on every continent. Kids and the young at heart can also play Christmas games, listen to songs, watch videos as Santa's sleigh passes landmarks across the globe, plus learn facts about Santa, NORAD and holiday traditions from around the world. NORAD's Santa Tracker is also available as an app for your Apple, Android and Windows devices. Twitter users can follow live updates from @NoradSanta on Christmas Eve. 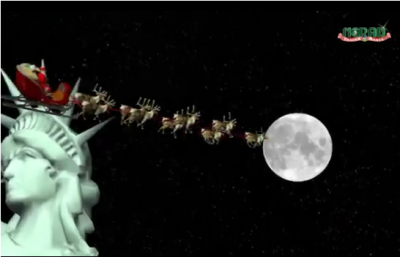 General Paul Selva, vice chairman of the Joint Chiefs of Staff, affirms that "the reindeer have been fed their quantity of oats and are prepared for the delivery of all of those gifts to those who have been nice and not naughty," at recent Armed Services Committee hearing.

The tradition of NORAD tracking Sasnta began in 1966, when a Sears Roebuck & Co. advertisement misprinted a telephone number for children to call Santa. The number sent youngsters calling the Continental Air Defense Command (CONAD) Commander-in-Chief's operations "hotline." The director decided to have his staff check for Santa flying down from the North Pole, and callers were given updates on his location. The tradition carried on when NORAD took over in 1958.

Google is also tracking Santa Claus with it's own Advent Calendar-style countdown and tracker, also available on Google Play.

NORAD tracks Santa from the International Date Line in the Pacific Ocean, west through Asia, down through Africa then back up through Europe before Santa and his reindeer team fly across the Atlantic to visit North America and South America.