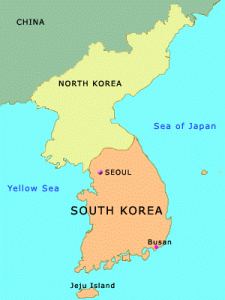 August 8, 2017 (San Diego) -- North Korea’s latest missile testings show them to be capable of targeting the entire West Coast of America.  The missiles’ standard trajectory is believed to have an average range of 10,400 kilometers, and much of the United States’ west coast lies between 10,000 to 12,000 kilometers of Korea.

It could reach much farther.  Co-director and senior scientist of the Union of Concerned Global Security Program, David Wright, asked by CNBC where it could hit in the U.S, stated, "Looks like it pretty much can get to New York, Boston and probably falls just short of Washington." He also supplied a graph listing the distance of each city from North Korea and how far the missile must travel to reach said city.

The Japanese Prime Minister, Shinzo Abe stated that the missile landed with 230 miles of Japan’s Coast.  But since it was shot at a high trajectory, straightening that out could put the U.S. squarely within reach. There is no information on how successful the reentry of said missile was or whether the missile was tipped with a payload that increased the weight.

The U.S. scheduled the testing of an unarmed Minuteman III intercontinental ballistic missile this past Wednesday from California. The Air Force Strike Command released a statement that revealed, "The purpose of the ICBM test launch program is to validate and verify the effectiveness, readiness and accuracy of the weapon system..."

While many have associated this announcement with the recent test from North Korea, Air Force Capt. Michelle Rollins did not support this. She explained that the U.S. military schedule is created several years in advance and that the timing is just a coincidence, rather than a response.

With all of the new missile testings, it shouldn’t be a surprise that some states are starting preparation for nuclear attacks. Hawaii’s state management have released official guidelines on the steps to take if you want to survive a nuclear detonation. These steps include seeking a blast resistant structure and to protect your eyes. They even release guidelines for adapting to the situation should you be on the beach or in the city.

These measures are a direct response to North Korea’s success through their missile testing, as Governor Ige confirmed during his first Facebook Live session, although he wanted to assure those viewing not to panic. “The possibility of a missile or bomb from North Korea is very, very low,” he stated. “It is a very unlikely event. Our whole focus is to make sure that we are prepared.”