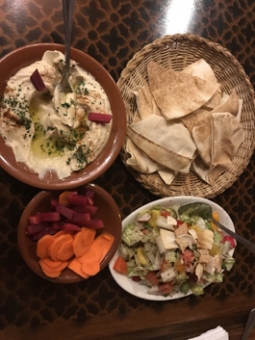 March 14, 2019 (San Diego) - A block from the intersection of College Avenue and El Cajon Boulevard, you’ll find a charming Lebanese restaurant nestled between a smoke shop and a Japanese restaurant. Alforon is what the Middle East should be if we could set aside politics and just enjoy good food and good people. Inside the restaurant were a diverse group of people ranging from Muslims in their hijabs, to Jews, to Anglo-Americans. The owner/ hostess/ waitress Sami seemed to know everyone by name.  She would pull up a chair in order to tell them what they wanted to order. Yes, you read that right, she was not shy about making (great) recommendations. It seemed to me that many of the customers had been there before and had brought a friend new to the restaurant with them. Such was the case for me, but in my case it was my dad who brought me.

Sami has an incredible memory for people and greeted my dad warmly and then looked at me in confusion and asked if I were his wife. I’m not sure if she remembered my dad coming in with my mom and was trying to tell me that he was married, or if I look similar enough to my mom that she was confused because I didn’t look as she remembered. So, I guess if you’re cheating on your spouse, don’t take your date there.

Sami’s husband, George Salameh, wasn’t always in the food business. In fact, his lifelong career was in automobile sales, but he always wanted to open a restaurant. They had the opportunity to buy a deli downtown, but when driving down El Cajon Boulevard, the saw this location was available and so decided to open up their own Lebanese restaurant instead. 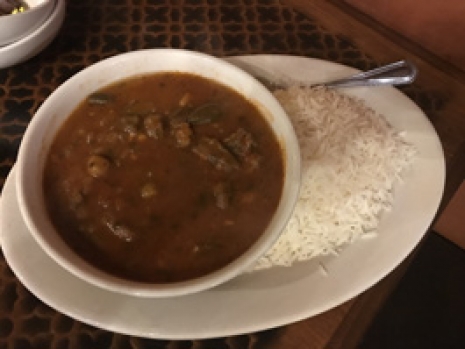 They have made the best restaurant list for four years in a row, and it’s easy to see why. With a friendly staff and food that is exactly what you were craving, even if you didn’t know it, it’s really hard to believe they haven’t been doing this their whole life. They have halal food so that the religious Muslims can come in, though they themselves are Christian Lebanese, and the food is good enough that anyone would want it. I couldn’t help but think that if the kosher restaurants that have opened and closed in San Diego had followed their model, we might have a lot more kosher options here — good food, good ambiance, good service — a winning combination.

To start, we ordered the hoummos which was served with pickled turnips and carrots and pita, of course. We also had the fattoush salad which had a bunch of chopped vegetables. Both were really good. We tried the jallab, which is a drink made from dates.  To me, it tasted like rose water, though I was told there was no such flavor in it. My dad really liked it, but it was actually a bit too sweet for me.

Then for the main course, my dad had the Lahm Bajeen, which was a crispy flat bread with ground beef  and tomatoes on it. The texture was perfectly crispy and there was no sogginess to it.

I had Bammiah, which is an okra and beef or lamb stew served with rice. I would have liked it to be a little more chunky, but the flavor was superb.

They had plenty of vegan options for those who don’t eat meat, and also some fish and chicken dishes as well. Really something for everyone.

Even though we were there past the normal dinner hour, the restaurant remained busy throughout.

There were several other dishes on the menu that looked really good to me, so I will have to go back to try it again. I guess that means that next time I’ll be the one bringing someone new to the table.

I think that I may have to give this restaurant my highest rating yet, a 9.5, maybe even higher, but I’m holding onto that 10 for something that just blows me away with surprising flavor and atmosphere —  this one comes very close though.

Sad she didn't try the chicken tawook, though; it's DELICIOUS!  And the lady who co-owns the place really does have a great memory; I came in a few months after my first time and she remembered me!