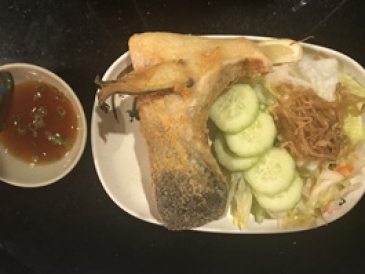 April 11, 2019 (San Diego) - Walking distance from Mission San Diego de Alcala is a little Japanese restaurant called Chiba.  It’s a tiny little place, where you will probably have to share table space with other diners due to the close quarters, but it’s not without it’s charm.

I have to tell you that my one serious snobbery is sushi.  Most of the time, if the restaurant is not Japanese owned, or at least Korean owned, I’ll pass on the sushi and eat off the regular menu instead.  Now, before you cry foul, the reason for this prejudice is because sushi is part of both Japanese and Korean culture and cuisines, so it’s not a culinary appropriation, but something that they grow up eating and making. Thus, they are more in tune with the simple nuances of the dish that can make a big difference in the flavors and textures — most noticeably the way the rice is seasoned, and the fish is cut.

If you’ve read my column, you know that I prefer my ethnic restaurants to be frequented by diners from that ethnicity.  For Chiba, however, I make an exception.  Even though it’s Vietnamese owned and almost entirely made up of non-Asian customers, it has made the list of Japanese restaurants that I will bring people to.

There’s one dish in particular that they do better than most other Japanese restaurants, and that’s their Salmon kama (Salmon collar).

Salmon kama is the part of the fish between the head and the body. There are some really meaty and tasty bits there.  It’s usually fried, and then you dip it into the Ponzu sauce (citrus soy sauce).  Chiba uses a golden ponzu that is a departure from the regular brown one.  The flavor has a little more vinegar to it I think, but it’s good none the less.

I also tried a new dish this visit, the Volcano nigiri. It’s on the appetizer menu and it is imitation crab (made from pollock and white fish) wrapped in seaweed, wrapped in rice and then wrapped in salmon.  It’s baked and then topped with shaved bonito and masago (flying fish roe).  I must say, it was phenomenal.  I will definitely be ordering that one again.  The flavors and textures worked well together and though it was messy to eat as it’s too big for one-bite, and falls apart when cut, it’s super yummy. 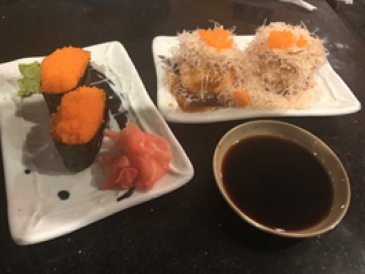 I also got a masago nigiri (left - nigiri is a little pillow of rice upon which the sushi sits, as opposed to maki, which is the rolled sushi) and it was as expected, but as long as the fish eggs are pretty fresh, there’s not much difference in that one from place to place.

Chiba is usually fairly busy, especially because it is so small.  It can be a challenge to find a parking spot because of the popular bar/grill with which it shares the strip mall. The service is always pretty good which is something so important to me that I won’t return to restaurants that don’t provide good customer service.  For this visit, knowing that the salmon collar usually takes an extra 10 minutes or so to prepare, I called ahead and asked them to get it started for me.  They took my name and phone number to make sure I didn’t ditch them, but agreed to my strange request.

All in all, I give them an 8 out of 10 and can definitely say that I’ll be back again.