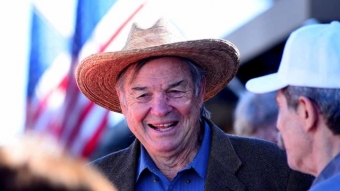 May 22, 2019 (Ramona) - Rep. Duncan D. Hunter returns to the scene of a raucous 2017 town hall when he takes part Saturday in another Ramona Mainstage event.

But his office doesn’t call it a town hall.

“Congressman Hunter has been invited to be the guest speaker, along with former Congressman [father Duncan Lee] Hunter, at the American Liberty Forum of Ramona on Saturday to discuss the topic of border security,” says Michael Harrison, the East County Republican’s spokesman.

“It is not a town hall; it is not a Duncan Hunter event,” Harrison said Tuesday of "The Border, Then & Now!" meeting. “He is coming as a guest.”

“The Ramona Mainstage offers free parking, an outstanding BBQ menu, and a full bar,” says its website. “We also want to remind you that security will be present at all forum events, and that uncivil behavior will not be tolerated.”

A Pasadena-based website said Ramona TEA’d was a nonpartisan group of citizens committed to restoring constitutional government at the local, state and federal levels.

“To help the local electorate with the critical issues and races in the upcoming elections, RAMONA TEA’D sponsors “Town Hall” forum events to cover timely topics that are in the news, or should be,” said theamericanview.com, citing ramonatead.com..

On Facebook, American Liberty Forum of Ramona says it supports the U.S. Constitution and Bill of Rights as “written and intended by our Founding Fathers. Our mission is to promote individualism and participation in our Constitutional republic, through educational forums and responsible activism.”

“As you may know, Duncan Hunter Jr. scheduled his first town hall in over two years,” said a statement. “Our call will focus on discussing how #HappyCampas should engage if attending the town hall.”

Hunter’s visits to Ramona don’t always get advance publicity — which led to a critical letter to the Ramona Sentinel by that town’s Dave Patterson.

“How nice that our ‘representative to Congress’ came to Ramona to answer questions but chose to only visit ‘Hunter friendly’ groups,” he wrote, citing an April 22 visit with representatives of the Ramona Chamber of Commerce, Ramona Veterans of Foreign Wars Post 3783 and American Liberty Forum of Ramona.

“Too bad his trip to the backcountry wasn’t advertised in the Ramona Sentinel or any other public media that I had seen. Mr. Hunter’s ducking of the public demonstrates another aspect of his lack of leadership, something we voters need to address when and if he comes up for election next year.”

Hunter and his wife, Margaret, face federal charges of campaign corruption and are set to go on trial this September in San Diego.

Hunter aide Harrison told The San Diego Union-Tribune that Saturday’s event is a chance to discuss “the effort and challenges in securing our border, what has been accomplished and what remains to be done, by two policymakers that have been at the forefront and involved with the issue for the past four decades.”

Five days before the November midterm election, Hunter held an Otay Mesa press conference and called for the use of military units to build a “high-speed foundational road” along the border as a way of “jump-starting” the still-unfunded border wall. No progress has been reported on the road.

I have been disappointed regarding the exact issues of this article, when it comes to what is; my "Representative", Duncan Hunter. I believe in Statesmanship and vocal representation which he is lacking. I am registered as an Independent because the Republicans have no conservative cohesiveness. It is not too late for him to open his mouth and show some enthusiasm regarding closing the border and ridding my country of lawbreakers, "illegal aliens"!