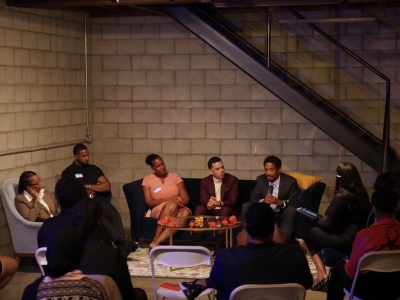 February 27, 2022 (Logan Heights) — The Greenwood district of Tulsa, Oklahoma was once a hub of Black-owned businesses that saw such prosperity that it became known as Black Wall Street — that is, until it was destroyed by white rioters during the 1921 Tulsa race massacre.

On Feb. 26, the San Diego chapter of the National Society of Black Engineers (NSBE) held their annual Professionals’ STEM Gala at the Handlery Hotel, in 1920s formal attire. The event was in commemoration of the 600 businesses lost in Tulsa, which “thrived economically solely based on the Black dollar throughout America,” stated the event description.

The evening also celebrated the Black communal wealth being built today, by “members and partners who have excelled in entrepreneurship, STEM fields, academics, leadership, and community impact.”

On the very first day of the month, the San Diego Chapter also held a Kickoff Mixer at the recently renovated 3167 Gallery. Organized by Elizabeth Cotton-Harps, Executive Director of San Diego-based group Black Tech Link and the NSBE Chapter Communications Chair, along with NSBE Chapter President and husband Jayton Harps, the Kickoff featured networking activities for recruiters and job-seekers alike, plus a live DJ and food. 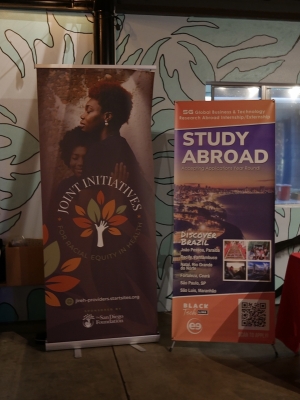 One theme of the event was the recent report from the Equal Employment Opportunity Commission that Black people compose only seven percent of the technology industry, compared to 14 percent of all other industries. Representation at higher executive levels is even more exclusive and white-dominated.

“That has to change. And the way we can change that paradigm,” said Shane Harris, CEO of S Harris Communications, “is by coming together, understanding even as millennials that we have an obligation to build up the next generation.”

Harris founded his own business after doing public relations work for activist groups in San Diego. His company, a public strategy and communications firm, aims to bring media presence to Black professionals who have long-deserved it, and to authentically connect the news media with the Black community.

“We have to establish and build Black-led organizations, Black-led companies,” he continued. “And we have to circulate that dollar between us so that we can establish that communal wealth.

San Diego’s NSBE chapter became Harris’s client just days before their Black History Month Kickoff, in a final push to help promote the valuable networking opportunity. “We need to get NSBE recognized a little bit more, because the work that is being done is too critical not to be televised,” asserted Harris.

Attending the event were many STEM and business leaders, some with ties to the National Black MBA Association (NBMBAA), who also supported the event. Taylor Thornton, Regional Director from the Los Angeles Chapter, attended and spoke with participants about her organization’s goal to expand their presence in the San Diego region. 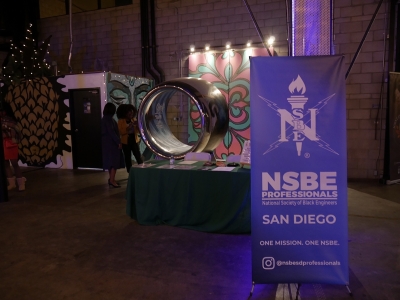 “We at the L.A. Chapter are hoping to increase our awareness here in the San Diego Region,” she said. “The chapter focuses on increasing entrepreneurial opportunities within the community, as well as increasing opportunities for those who are interested in becoming business men and women within the black community.”

Other non-corporate sponsors, who had a presence at the event, included Greater Than Tech Robotics, The Blue Heart Foundation, San Diego Code School, the San Diego Urban League of Young Professionals, Champions for Health, Joint Initiatives for Racial Equity in Health, and the Multicultural Health Foundation’s Together Against COVID team.

However, the culminating piece of the Kickoff Mixer had yet to come. A panel discussion titled “Pivoting Your Career During the Pandemic as a Black Professional” was on the agenda, featuring six San Diego professionals and executives.

Moderated by Sacha Brackins — the founder of Brackins Creative Agency who is on a mission to create at least 100 Black women millionaires by 2025 — the panelists discussed the interviewing process, the mentality of being an intern and working one’s way up, and what companies are looking for in new applicants.

“They want to see some sort of passion,” said Daniel Quiñones, Project Manager at Nasland Engineering. “They want to hire somebody that they feel is potentially going to work at the company for a number of years. They’re not just there to help you; how can you help them? That is the mindset of an employer.”

“If you have 25 percent of what they’re asking for, apply for it,” chimed Jennifer Hairston, Diversity and Inclusion Project Manager at Illumina. “It never hurts. If you get rejected, you get rejected.”

Hairston continued to encourage the audience. “Be your biggest cheerleader, and don’t be afraid to fight for what your worth is for, ‘cause if you don’t nobody else will.”

“Don’t be afraid to slide into someone’s LinkedIn DM to get a job,” added Josi Swonetz, Legal Counsel at Best Buy Health. “Your white counterpart is not going to be afraid to call up their friend, or call up their daddy’s best friend that he golfs with, and say ‘can you give me a job at your company?’”

Harris, who was also a panelist, emphasized the value in establishing oneself on an independent level.

“We’re not following anybody, they’re following us,” he said. “So many pioneers have led the way from our community.”

With a guided breath and warning from Brackins, the discussion then turned toward heavier issues. Following her question, panelists reflected on their experiences in corporate America after the murder of George Floyd.

“I feel like George Floyd woke a lot of people at Best Buy up to what we’ve always known and we’ve always seen,” remarked Swonetz, who noted that Minneapolis is right in Best Buy’s backyard. “This isn’t new for the Black community, but I think it really shook them, especially because it happened right there.”

Swonetz noted some positive changes at Best Buy, but the panel agreed that big companies often fail to live up to promises. Meanwhile, they put employees of color in difficult positions where they may be expected to shoulder the burden of change with their words and actions.

As one audience member commented, the work put into diversity, equity, and inclusion (DEI) initiatives is time-consuming and it is often not in people’s job descriptions. This can lead to “the weird situation of providing free labor for a big company,” they said. The opportunity may be valuable, but to participate can come at a sort of “detriment to your career.”


The panel resonated with this comment, and they cited the need for dedicated and accountable leadership figures who fairly pay the people who are, in some cases, establishing corporate policy for the first time.

“If a company’s committed to DEI,” affirmed Harris, “it needs to be emphasized with your employees first.”

In light of this discussion, the panel wrapped up with a conversation about therapy and authentic self care.

“That feeling you’re feeling inside is telling you that something’s not right,” commented Fred Grier, Marketer at Deloitte. “And you can’t ignore that, because eventually it’s going to burn you out.”

With that, organizers Elizabeth Cotton-Harps and Jayton Harps closed out the event with a NSBE chapter chant, and a recitation of the mission statement, which is: to increase the number of culturally responsible Black engineers who excel academically, succeed professionally, and positively impact the community.

Taylor Thornton also said farewell to the audience, reminding them to get involved with  the National Black MBA Association Los Angeles Chapter, to potentially spur a San Diego Chapter being formed.

“Thank you all for being so vulnerable about your experiences,” she concluded.

As music swelled back on and people began to mingle one last time, the honest and supportive words of the entire panel still hung in the air.

Very important and imformative article by Elijah McKee about the Greenwood district of Tulsa, Oklahoma, better known as the Black Wall Street during the Tulsa race massacre of 1921. As the former Associate Editor of the East County Magazine, having written more than 450 book reviews, two of which won the NAACP Image Award in Literature, Michelle Alexander's "The New Jim Crow" and  Gregory Reed's "Obama Talks Back", this article by Elijah McKee is one that I would have love to have written. Congratulations Elijah.