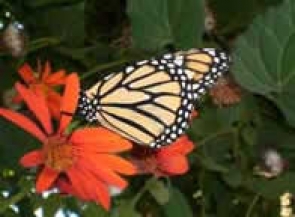 May 31, 2021 (Sacramento) - As the spring gardening season gets into full swing, groups fighting to save bees and other pollinators are asking nurseries and consumers to avoid plants grown with harmful pesticides.

Some pesticides are sprayed on, but others are systemic and poison the nectar.
Sharon Selvaggio, pesticide program specialist at the Xerces Society for Invertebrate Conservation, said gardeners may end up harming the pollinators they're trying to protect, so they need to ask questions before they buy.
"What we want is for people to go to their nursery and say, 'I want plants that are free of pesticides that might harm pollinators,'" Selvaggio urged.
Xerces has published a tip sheet for consumers on what to ask, and another for nurseries on how to offer bee-safe plants.
More than a quarter of all North American bumblebees are nearing extinction. And the Western Monarch butterfly population has plunged more than 99% since the 1980s, a situation experts blame on pesticide use, climate change and destruction of habitat.
Sarah Hoyle, also a pesticide program specialist at Xerces, co-authored a study in 2019 which tested native milkweed across the Central Valley for pesticides because it is a host plant for monarch caterpillars.
"Pesticides were really ubiquitous, kind of everywhere we looked," Hoyle reported. "Home gardens, parks, agricultural lands and wildlife refuges. We were finding the pesticides were present and really all too often at lethal levels.
Kendra Klein, senior staff scientist at the nonprofit Friends of the Earth, said her group published a report in 2014 called Gardeners Beware, and later secured commitments from Lowe's, Home Depot and other nursery chains to stop selling plants grown with neonicotinoids and other harmful pesticides.
"These are pesticides that are highly, acutely toxic to bees and other pollinators and are known to be a driver of what some scientists call an insect apocalypse, major declines in pollinator insect populations around the world," Klein explained.