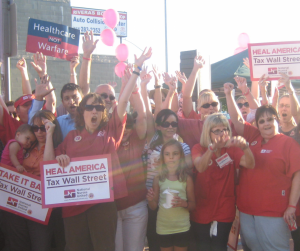 They proposed what the California Nurses Association calls a "Main Street Contract," an economic recovery program for America with a new funding mechanism: a simple financial transactions tax on Wall Street.

Chanting their slogan "Heal America, Tax Wall Street", nurses and progressive organizers representing education, housing and labor joined hands, told their stories, and shared a meal. This street-heat action follows on the heels of an aggressive lobbying campaign in which all 435 members of the House and all 100 Senators received a letter urging them to stand with nurses and sign the pledge for a Main Street Contract. ( for details see http://www.nationalnursesunited.org/affiliates/entry/msc1)

The grassroots lobbying group Progressive Democrats of America was one of the groups represented, bringing the message "Healthcare, Not Warfare," to redirect federal priorities towards healing, not destruction.

On the evening of Thursday, September 1, a well-organized squat of red-shirted nurses and labor organizers set up a soup kitchen in a parking lot near El Cajon Blvd and Fairmount Ave, a solidly blue-collar neighborhood which has borne witness to the recent economic devastation wrought by "out-of-control speculation in the financial sector" according organizers.

Brightening up the event with colorful "Heal America" banners painted by elementary students, the local San Diego-Imperial Counties labor council brought City Heights community residents together with California Nurses Association (CNA) members to hear their message -- that America needs to make a contract with Main Street.  Rally organizers contend that it's past time to reform the tax code with a "Financial Transaction Tax" to promote greater tax fairness, and let Wall Street help contribute its fair share through a small tax on the estimated $770 trillion annual turnover in securities, bonds and derivative financial instruments, including flash trading.

Some wondered, "Why are the nurses leading this charge?"

Geri Jenkins, past President of CNA had a direct answer. "Every day, nurses are out there treating the sickest members of society. We are on the front lines of this economic crisis."

While the neighborhood's low and very low income residents shared soup and rice and beans, organizers and residents shared their stories. Organizers Terry Bunting of California Nurses, SD-IC Labor Council President Lorena Gonzalez and School Board Member Richard Barrera were among those taking turns serving meals. They also spoke with the estimated 300 attendees about the need for a new economic recovery plan which includes simple tax on Wall Street financial transactions. Raising an estimated $350 billion in new revenue, the Wall Street Tax is a way to fund better health care, jobs and housing, spurring jobs and economic growth in hard-hit areas like the City Heights neighborhood.

The San Diego event was coordinated with dozens of similar "Heal America, Tax Wall Street!" events across the USA, where similar messages were voiced. “America’s nurses see every day the broad declines in health and living standards that are a direct result of patients and families struggling with lack of jobs, un-payable medical bills, hunger and homelessness. We know where to find the resources to bring them hope and real solutions,” said Janice Webb, RN.

A tax on Wall Street trading of stocks, bonds, derivatives, currencies, credit default swaps, and futures – the very financial speculative activity linked to the 2008 financial meltdown and resultant recession – could raise hundreds of billions of dollars to pay for the programs that “are desperately needed to reduce the pain and suffering felt by so many families who feel abandoned in communities across this nation,” commented RoseAnn DeMoro, Executive Director of the National Nurses United.

For information about this event and upcoming National Nurses United events, see http://www.nationalnursesunited.org/