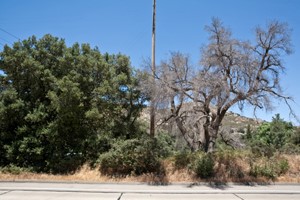 May 16, 2015 (Ramona)--A voracious insect has devastated oak trees that once formed a canopy shading visitors at Dos Picos Park in Ramona.

In recent months, over 100 mature oaks have been cut down after they were killed by the gold-spotted oak borer, and more are slated to be felled—some up to 200 years old.  Drought left the trees weakened, making them susceptible to the destructive insect pest.

The dead trees had to be removed to protect the safety of visitors from falling limbs, UT San Diego reports.

Gold spotted beetles first appeared in San Diego County in 2004. By 2010, they had killed tens of thousands of trees countywide.

Campers can help prevent the spread of the beetle by not moving firewood from one place to another.

The park is treating beetle-free trees with an insecticide in hopes of protecting them.  In addition, young oaks will be planted along with faster-growing native trees such as sycamores. Though it will take decades for the oaks to mature, the sycamores should be large enough to provide shade in just a few years—though the park won’t be the same without its canopy of heritage oaks.