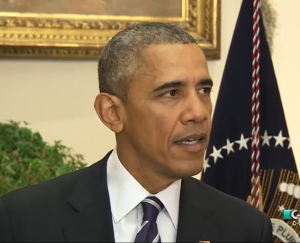 November 6, 2015 (Washington D.C.) --  Today, President Barack Obama announced that after six years of review,  the U.S. State Department has decided that the Keystone XL  Pipeline “would not serve the national interest of the United States.  I agree with that decision,” the President said.

Obama indicated that the pipeline would be “neither a silver bullet for the economy, as was promised by some, nor the express lane to climate disaster proclaimed by others.”  He then laid out key reasons why his administration has rejected the pipeline.

First, he indicated, “The pipeline would not make a meaningful long-term contribution to our economy…What we should be doing is passing a bipartisan infrastructure plan that, in the short term, would create more than 30 times as many jobs per year as the pipeline would, and in the long run, would benefit our economy and our workers for decades to come.”

Second, President Obama stated, “The pipeline would not lower gas prices for American consumers.” Gas prices are already down a dollar over two years ago and in 41 states, gas is under $2 a gallon at some stations.

Third, the President indicated, “Shipping dirtier crude oil into our country [from Canada] would not increase America’s energy security. What has increased America’s energy security is our strategy over the past several years to reduce our reliance on dirty fossil fuels from unstable parts of the world.”   Obama set a goal to cut oil imports in half by 2020 and met that goal this year – five years early.  His administration also set a goal to double gas mileage of cars by 2025 and has tripled power from wind and increased solar power 20-fold.  “America has cut our total carbon pollution more than any other country on earth,” he noted.

Republicans blasted the President’s decision.  The Republican Party has claimed the pipeline would create up to 42,000 jobs. But USA Today reports that nearly all of those would have been temporary or supplier jobs; once built the pipeline was expected to employ less than 50 people.

But Florida Governor Jeb Bush, a Republican presidential candidate, stated, “The Obama administration’s politically motivated rejection of the Keystone XL Pipeline is a self-inflicted attack on the U.S. economy and jobs.”

Terry O’Sullivan, president of the Laborers’ International Union of North America, criticized  Obama for “kowtowing to green-collar elitists” instead of creating blue-collar jobs for pipeline workers.

350.org, an organization dedicated to reversing climate change, hailed the decision.  In an e-mail to supporters, the environmental group stated, “President Obama’s courage today is a reflection of the courage shown by thousands of people who have sat in, marched, organized and opened a lot of emails across North America against this pipeline.”

The battle to halt the pipeline began in Canada with the First Nations, tribes of Native people opposed to extraction of dirty tar sands that would impact theirlands.  Later, farmers, ranchers, and tribal nations along the pipeline route joined the protest, along with enviornmentalists and others.

350.org accuses the oil industry of increasingly reckless actions such as fracking during California’s drought (using and contaminating millions of gallons of water), creating huge coal pits in Appalachia and seeking to pump tar sands from Canada to the Gulf of Mexico.

“When world leaders meet in Paris later this year,” 350.org’s letter concludes, “they’ll do so knowing what our movement can do, and what climate action really looks like, keeping fossil fuels in the ground.”