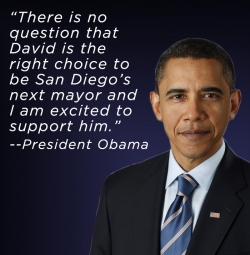 San Diegans head to the polls on Tuesday to elect the city’s next mayor.   Councilmembers David Alvarez and Kevin Faulconer are vying for the spot.  The race is a classic matchup pitting interests of working people vs. big business.  Urban poor and minorities vs. wealthy powerbrokers   Boosting budgets to help those in need vs. belt tightening and fiscal restraint.

As the election draws near, some high-profile endorsements have been announced.  Today, President Barack Obama weighed in on San Diego’s mayoral race, throwing his support behind Alvarez.

“As a native San Diegan, David Alvarez has been a fierce advocate for his city, and on the Council, has led efforts to build a strong middle class, put neighborhoods first and expand opportunities for kids in and out of school,” the President said.

is the only candidates who has published a blueprint to help the homeless.  His plans for San Diego overall include investing in neighborhoods, putting San Diegans back to work, building a sustainable city, supporting public education, ensuring long term water security, and transparency in government.

Faulconer has positioned himself as a guardian of taxpayer dollars, cutting regulations and fighting against tax increases.  He’s pledged to increase public safety and protect parks and open spaces.

Faulconer’s campaign contributions have come largely from the conservative Lincoln Club, the Chamber of Commerce and other business interests. Alvarez’s funding comes substantially from labor interests.

The two are vying to replace the vacancy left by the resignation of Bob Filner and replace Interim Mayor Todd Gloria to lead San Diego.