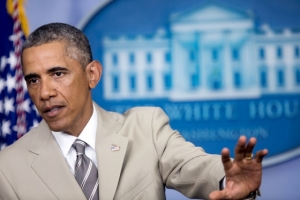 September 10, 2014 (Washington D.C.)--President Barack Obama will address the nation tonight to lay out his plan for action against the Islamic State of Iraq and Syria, or ISIS, also known as ISIL.

On Tuesday, the President told Congressional leaders that he has the authority to take on the militant Islamic group. But a statement issued by the White House indicated that President Obama believes that “the nation is stronger and our efforts more effective when the President and Congress work together to combat a national security threat like ISIL.”

The President signaled that he would welcome Congressional actions to demonstrate to the world that the United States is, truly, united in its resolve to defeat the threat posed by the terrorist organization, which is a radical offshoot of Al Qaeda.

Although the atrocities committed by ISIL in Iraq has sparked calls for action, the roots of ISIL are in Syria.

The President has thus far said he would not support boots on the ground, meaning U.S. ground forces, only air strikes.  Today, Republican House Speaker John Boehner said he would back the use of American troops as advisors to Iraqi Security forces and lethal targeting of ISIS leaders, CBS supports. He also called for bolstering policies here at home to protect against the possibility of an ISIS attack on American soil.

Bipartisan legislation has been introduced that would authorize use of U.S. military force against ISIS.

California Democratic Senator Dianne Feinstein called ISIS a major threat to the U.S., during an interview on CNN’s State of the Union program.  She praised the president for taking the offense against ISIS and for working to build a coalition of allies in the fight.

Republican Congressman Darrell Issa has introduced a resolution requiring the President to revoke the 2002 Iraq War Powers Resolution and create a new, short-term authorization for use of force, UT San Diego reports.

Under the old War Powers Resolution,  the President was limited to 60 days for use of military force and since he ordered air strikes against ISIS in August, that limit would be reached on October 7.  Issa’s resolution would give the President a 120-day authorization for use of force to protect American interests and prevent further expansion of ISIS.

Meanwhile, a Washington Post-ABC News poll shows that support for U.S. military action against ISIS has grown sharply in recent weeks. The latest poll found that 71 percent of Americans now  support airstrikes in Iraq and 65 percent would support U.S. airstrikes in Syria.