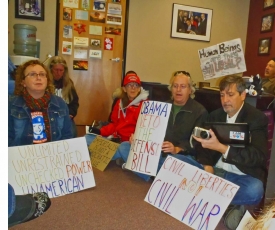 Update January 6: Senator Dianne Feinstein has announced she will introduce legislation to repeal controversial language in this measure.

January 1, 2012 (Washington D.C.) – President Barack Obama has signed into law the National Defense Authorization Act, just days before military funding was set to expire. The measure allocates $662 billion for 2012 funding, $27 billion less than the President requested and $43 billion less than Congress approved in 2011.

The measure has raised concerns among civil liberties and human rights groups who argued that the bill could allow indefinite detention of U.S. citizens on American soil, however last-minute amendments have attempted to allay those concerns.

The President had initially threatened to veto the bill, but ultimately issued a signing statement calling the measure “minimally acceptable” and clarifying that his administration “will not authorize the indefinite military detention without trial of American citizens.  Indeed,” the President said, “I believe that doing so would break with our most important traditions and values as a nation.”

Davis’ office issued a statement, however, clarifying that “In fact, this bill explicitly exempts U.S. citizens from any changes to current law.  Section 1032 states that `The requirement to detain a person in military custody under this section does not extend to citizens of the United States.”  (Davis’ statement is accurate; read the full enrolled copy of the bill passed by both houses here:  http://www.gpo.gov/fdsys/pkg/BILLS-112hr1540enr/pdf/BILLS-112hr1540enr.pdf

Some protesters had indicated that sections 1031 and 1032 could prove problematic on various grounds under the Fourth, Fifth and Sixth Amendments to the U.S. Constitution.  Some if not all of the specific issues raised appear to have been addressed in last-minute amendments.

California Senator Dianne Feinstein introduced the amendment which expressly stated that the bill would not apply to American citizens arrested in the U.S. The language does not satisfy everyone, however. Kenneth Roth, executive director of Human Rights Watch, cotends that the bill could be interpreted to have “enshrined indefinite detention without trial in U.S. law.”

Opponents contend that the measure kicks ultimate authority to the courts by stating that the bill does not alter current authorities relating to detention.  That leaves the door open for the U.S. Supreme Court to resolve the issue, should a future president try to claim authority to detain an American citizen on U.S. soil.  Such a case might cite the 2004 Hamdi v Rumsfeld case, in which an American citizen captured fighting with the Taliban in Afghanistan was held in military detention, though he was not in this country when taken into custody.  Opponents also note that the bill appears to codify into law the indefinite detention of terrorist suspects at Guantanamo Bay, Cuba.

President Obama had initially threatened to veto the bill, but ultimately signed it and released a signing statement Saturday.  He said his administration may seek to repeal any provisions that are inconsistent with his values. He also expressed concern over language that would apply sanctions against the Central Bank of Iran  to pressure Iran to abandon its nuclear weapons program.  The White House has indicated it’s concern over the Iran sanctions is that they could backfire, making it harder to persuade other countries to join the U.S. in multilateral sanctions, a move the President has indicated could potentially disrupt oil markets.