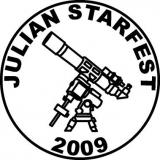 August 7, 2009 (Julian, CA)--(Julian, CA) “Eagle Observatory” will be dedicated at Julian High School at 5 p.m. on August 18, 2009. The astronomical observatory, funded through donations and built by volunteers, will be officially “opened” for observing and “first light”. Named “Eagle” for Julian High School’s mascot, the donated observatory is the result of tremendous collaboration that was organized by the founders of Starfest, a three-day stargazing festival slated for August 20-23 at the Menghini Winery.

The observatory was the brainchild of Mike Leigh, Chuck Kimball and Scott Baker, the founders of Starfest, an event in Julian first held last year, that brought the science, technology and education of astronomy to the citizens of San Diego. From its inception, a goal of Starfest was to fund the construction of an observatory at the local high school to advance the teaching of astronomy.

According to Scott Baker, Starfest General Manager, “the dream to build a local observatory took on a life of its own. In addition to funds contributed from last year’s Starfest proceeds, there are so many people to thank who made this project possible.”

Baker added, “We couldn’t have built the observatory without the huge volunteer labor commitment over the past few months by Terry Cox, Joe Connolly, Harold Smith and Bob Doan of the Julian Lion’s Club.”

The dedication ceremony will turn over the keys to the observatory to Jim Peabody, Julian District Superintendent of Schools and Julian High School’s Principal, with students and faculty present. The Starfest founders, Scott Baker, Chuck Kimball and Mike Leigh, as well as members of the Julian Lion’s Club, will be present to roll off the roof and turn the telescope to the heavens for its “first light” in its new home.

Anyone can enjoy the Julian Starfest by participating in the free public star party on Saturday, August 22, 2009. Arrive in Julian between 7pm and 9pm and you can enter the Starfest grounds (1150 Julian Orchards Dr, Julian, CA 92036) for free and take a star tour of the heavens using the many telescopes set up in the viewing area. Experts will be on hand to answer questions about what your looking at and about the telescopes. Parking is available nearby and we suggest you bring a red light flashlight to guide yourself to the observing area. If you don't have a red light flashlight, red film will be provided to cover a white light flashlight. Please, no white lights in the observing area.

Attention Imagers and Serious Observers!  There is now a new "Premium" observing site for imagers and serious observers. This site, located on the hill to the north of the winery is in an abandoned reservoir. You will be above ALL light intrusion and down in a basin that has a 10' tall embankment with low trees around the edges. The embankment and trees give a good deal of wind protection in addition to obliterating any stray light. For more information, see www.julianstarfest.com.