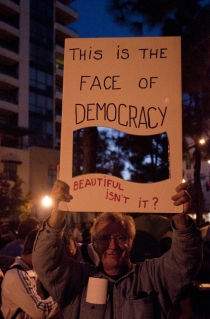 The public can sign a petition asking Council members to support peaceful demonstrations by Occupy San Diego. The movement is protesting big banks and corporate influence on government that supporters believe are hurting the interests of "99 percent" of Americans. A similar resolution has been adopted by the Los Angeles City Council in support of Occupy Los Angeles.

Occupy Los Angeles members will be joining San Diegans from 9 a.m. to 12 noon Tuesday to show solidarity, according to sources within the movement. Marchers will gather at 9 a.m. at Children’s Park, First Avenue and Island, then march to City Hall at the Civic Center Plaza to attend the City Council Meeting at 10 a.m. (12th Floor, City Hall Building at 202 C Street. The petition will be delivered to the Council during public comment period at 10 a.m.

Free parking is available for 3 hours at Horton Plaza, with validation from machines located in the Mall. Street meters are 2 hours only.