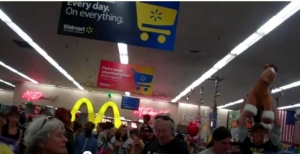 Some pushed shopping carts to blend in with shoppers at check-out stands, until an organizer announced, a " Mic check!" Then announced, "In the spirit of holiday giving, we believe a discussion is in order about the meaning of value and low cost. For every low-priced product purchased at Walmart, your communities pay the difference.”  Participants repeated each line announced by their leader, forming a human microphone throughout the two stores on Murphy Canyon Road and Shawline Streets.

As stunned shoppers looked on, some joining in the refrains, the occupiers proceeded to deliver their full messages, uninterrupted by security.   Scroll down for full text of the message:

Citizens of Walmart!! Greetings and welcome back from the food coma!! In the spirit of holiday giving, we believe a discussion is in order about the meaning of value and low cost. For every low-priced product purchased at Walmart, your communities pay the difference.

Every price drop represents mistreated workers who STILL cannot feed their families, STILL cannot afford their homes, and STILL cannot payoff their tuitions. Every sweet deal can be attributed to our jobs being outsourced from American communities. Each item on sale helps bankrupt small businesses.

You, your communities and your workers are being abused. Walmart intentionally under=employs, forgoing REAL benefits for social services, costing California taxpayers $86 million annually. Walmart employees are overworked, underpaid, and left under-insured in poor and unsafe conditions. Walmart could fire its employees for the mere mention of forming a workers union; which is the best tool American workers have to protect their rights.

Corporate beasts such as this one bleed our communities dry by putting the local business owners, who actually have personal stake in your communities, at a disadvantage against these gluttonous juggernauts. Yet they have the nerve to tell you it's for your benefit.

So this holiday season, give yourselves, your families, and your communities the gift of empowerment. Act locally! Shop small business! Buy American! Thank you, Exit safely, and remember to smile.

“We receive thumbs ups from employees, smiles from most, claps at the end,” one participant posted online.  “When walking out, the three cops there smiled at us as we walked past shouting “We are the 99 percent. You are the 99 percent.”

Not everyone was supportive;  one shopper shouted a profanity and called the protesters “socialists.”

According to NBC San Diego, reaction among employees and shoppers was missed.  One woman present expressed disappointment that employees would have to put away items left in shopping carts after people left the store.  But a man who witnessed the demonstration praised “anything that’s gonna bring this country together” as a positive step.

An East County resident made this observation.  "...They do not have a right to trespass on private property and intimidate customers."  She added that while she normally supports emphasis on "buying local to invest in our community...this video makes me feel a need to go shop at WalMart just to make the point."

But another local resident, who asked that her name be withheld, had a different view. "I hope this action educated some Walmart shoppers on the negative actions of the company and encourage people to think about the power of their shopping dollars to encourage responsible actions that support our community."