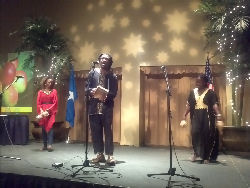 October 28, 2012 (San Diego)--During the Somali Civil War, the number of refugees admitted to the United States soared starting in 1991. San Diego is now home to the second largest East African refugee community with an estimated population of 30,000. A real need arose to integrate the growing number of new immigrant refugees into the San Diego community. Ahmed Sahid, President and CEO of Somali Family Service of San Diego, states, “It’s very important to us that we work with other like-minded organizations to accomplish our goals.”

Established in 2000, the Somali Family Service has been helping to meet the needs of Somali and other East African refugees as they transition to life in the United States and to partner with other individuals and organizations. The OceanLeaf Awards Celebration Program on Wednesday night, October 17, 2012 recognized eight individuals whose leadership and commitment to the Somali and East African community is exemplary. The following individuals were honored in six categories: 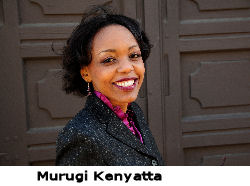 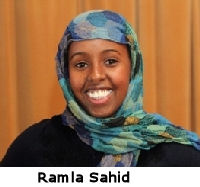 This inspiring celebration was held at the beautiful Jacobs Center at Market Creek Plaza on Euclid Avenue in City Heights. The evening began outdoors with refreshments, displays, henna tattoos, and a small marketplace of East African jewelry, coffee, and clothing. Then inside the Event Center, with Jesse Mills, Ph.D as Master of Ceremonies, the celebration continued with a three-course dinner, entertainment, keynote address and, of course, the OceanLeaf Awards. 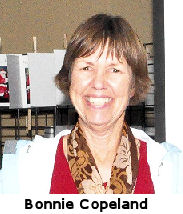 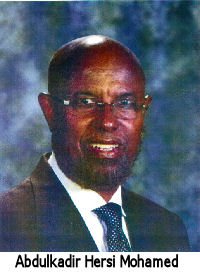 With the theme of “Peace and Unity,” guests were treated to poetry, dancing and music, making this event a true celebration of all of the work that has been accomplished this year. The name “OceanLeaf” is symbolic of passage over the ocean to a new homeland and new growth that adds richness of culture and meaning to life. This was reflected in poetry read by Munira Mohammad and Mohamed Sahid. Then the Somali Dhanto Dancers entertained with colorful outfits and joyous dance movements as they crisscrossed the stage. A musical ensemble performed by Center For World Music with Jacob Mafuleni and Martha Thom from Zimbabwe soothed the audience with vocals and instruments that included gourd rattles.

Keynote speaker, Nancy Sasaki from Alliance Healthcare Foundation, reminded the crowd of a Somali saying: “Either you are a mountain, or you lean on the mountain.” She spoke of building community and how we show support for each other in the areas of heath and wellness. Another area of support is self-esteem and choice for young people, who can now gain support from Project LION of Somali Family Care Network. LION is an acronym for Leaders In Our Neighborhood; a resource of student leaders who go into the community to galvanize forces for effective change.

How else does community building happen in this new Somali and East African community?  I was able to speak with two of the honorees, one seasoned veteran in the helping professions and one emerging young leader who is a Somali. 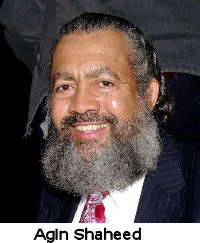 Agin Shaheed is the fourth Program Manager/Director of a 31 year old program of the San Diego Unified School District; The Race/Human Relations and Advocacy Program. Agin was chosen to receive the OceanLeaf Leadership Award for his role in providing the means to develop understanding, appreciation, and effective communication and conflict resolution skills among people of various cultural, racial, and ethnic backgrounds. In fact, he told me that the most rewarding aspect of his profession is assisting people to work through differences to find the things they have in common, as well as to create better school districts. He believes that “diversity really helps us to know ourselves in a variety of ways and strengthens society as we bring together all of our individual strengths.” His program partners with such organizations as the Padres, Somali Family Service, Legal Aid Society, and the Anti-Defamation League, among others. 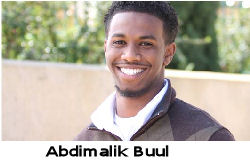 A remarkable young man and Chairman of the Somali Youth League, Abdimalik Buul was one of two East Africans chosen to receive the Emerging Leader OceanLeaf Award this year. A 2012 SDSU graduate with a Masters Degree in Education, Abdi was instrumental last year in organizing youth to raise $30,000 for the food crisis in Somalia. Traveling overseas to deliver the supplies, he also arrived at a personal epiphany. When he was four months old, his family escaped from the war torn country. Having traveled back to Somalia, he now has a deep feeling and commitment toward his parents because of what they went through to get him to the United States. He shares of himself and others, “We felt it incumbent upon us to give back.”

In his Three Generations Mentorship Program, he helps others to create a pipeline for Somali students from high school to the workforce. Many Somali and East Africans are first in their families to become high school students, college students, and professionals. As mentors, they help guide others who now have to navigate the stormy seas of poverty, language barriers, cultural differences, and educational challenges that many immigrant refugees face. He is currently a Program Specialist at San Diego Workforce Partnerships.

Project Refuge is one of the many groups founded to work with this population, specifically in the area of helping refugees who have been political prisoners and/or victims of torture. Dory Beatrice Griffith explained that this important work includes organizing safe homes for recently arrived asylees to stay in for their first three months in the U.S. and then helping  them to transition to a home and work environment in the community. 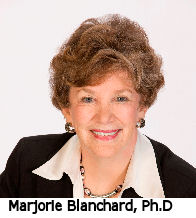 Another of the honorees, Marjorie Blanchard, Ph.D., received the OceanLeaf Innovation Award for her involvement with Project Refuge, which she was introduced to through her association with the La Jolla Golden Triangle Rotary Club. She helped clients of this program make, market, and sell their jewelry, providing them with a means for self-sufficiency and sustainability.

This is the second Annual OceanLeaf Awards Celebration, and there are certain to be many more as there is ongoing work to be done. According to Ahmed Sahid, mentioned earlier as the President and CEO of Somali Family Service, “This evening marks another year of progress and celebration as so many in our community rebuild their lives in a new homeland and become active, engaged citizens.” SFS’s own Mission Statement includes these important key concepts: “…helps Somali and other East African families to become self-sufficient, responsible, independent, and contributing members of the San Diego community.”