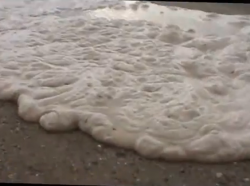 At 4:40 p.m. a storm hit, sending massive amounts of dust into the air, this time coming directly from project access dirt roads created by Pattern Energy, according to Jim Pelley, who shot this video. Soon after, a storm brought flash flooding, which residents claim is worsened by drainage changes made by the wind developer.  The flood brought a repeat of an unknown white sludgy substance washing across the desert floor and into the town.

“The white foam is back moving across the project. It was a bit eerie,” said Pelly, who took video of today’s white foam flood as well. 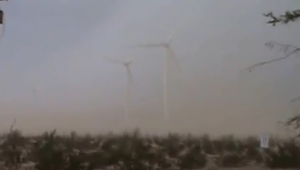 Yesterday also brought flooding, along with a rare sign of beauty in Ocotillo these days: a double rainbow, arching over the project.  View video. 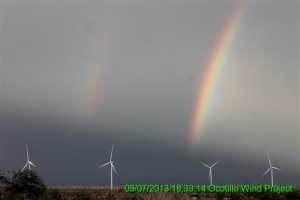 “Dust was never an issue in Ocotillo before the project,” Ocotillo resident Bill Pate observed.  Dust storms have become more frequent and more severe since the project’s completion, with some resembling Dust Bowl era dust storms – a phenomenon that has occurred in Texas and Arizona at places in close proximity to massive wind and solar projects that scraped bare the desert, as occurred in Ocotillo.

The dust storms raise concerns over Valley Fever and respiratory conditions such as asthma. Residents have advised ECM that Imperial Valley is not requiring testing of Valley Fever patients who present with pneumonia-like symptoms even though in Arizona, some 30% of such patients are found to have Valley Fever. 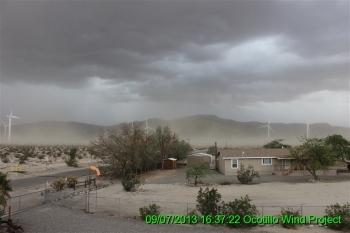 Residents asking for a Valley Fever test in Ocotillo have been advised that unless a doctor recommends the test, the cost is prohibitively high – nearly a thousand dollars in some cases.

“It's almost as if they were punishing us for daring to question the exposure. So what this means is that if you go to your doctor's and just ask for the test, then insurance won't cover it,” said Linda Ewing, who was charged $685 for the test.

Imperial Valley resident Edie Harmon asked, “Why don't the ERs in Imperial County have tests ordered for Valley Fever for the more than 33 % of cases of Community Acquired Pneumonia for which no pathogen was identified?  Surely, the cost of the test is far less than the cost of treating the illness if not diagnosed or properly treated earlier when patients first seek treatment.”

A recent article on prisoner deaths from Valley Fever notes that many fatalities could have been avoided with earlier testing.

As for the foam that residents fear could be residue from herbicides approved for spraying at the site and/or chemicals used for dust suppression in the wind project’s construction—chemicals they fear may contaminate the town’s only drinking water supply--, authorities have provided no answers yet despite questions raised in our August 30th article titled “What’s polluting the waterways in Ocotillo?” following the latest white foam flood.

We also ran a story in July 2012 raising the same questions.  Residents complained of third-world conditions after flammable dust suppression chemicals flooded the town, even washing onto yards where children play. No cleanup was ever ordered. 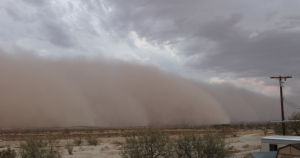 See also our prior coverage of severe dust storms in Ocotillo, including storm shown at left, where dust clouds up to 2,000 feet tall obscured even 500-foot-tall wind turbines:

Where are public health officials?  Why is nothing being done to stop these hazards and protect residents from water pollution, chemical runoff and extreme dust?

Communities in other areas weighing potential wind projects should consider the long-term consequences to residents—and the failure of public officials to protect the public health, when considering whether or not to approve more massive energy projects on public lands.