At a community meeting before the Ocotillo Express Wind Facility was built, a Pattern Energy representative told community members that the company hoped to alleviate lighting issues with a new technology that had preliminary approval from the FAA.  “It’s a technology that allows lights to stay off and only come on if an aircraft is approaching,” the Pattern representative explained. “It flips on lights just for the time that that aircraft is within range and then flips back off.”  https://www.youtube.com/watch?v=C5zgBX74T6Q

The technology does exist.  Back in August 2012, while this project was in early phases of construction, wind turbine manufacturer Vestas reported on its website that it acquired the Obstacle Collision Avoidance System technology way back in October 2011. “OCAS is approved by aviation authorities in the U.S., Canada, Norway and Sweden and is already installed at more than 60 sites throughout Europe and North America ,” Vesta state last summer. http://www.vestas.com/Default.aspx?ID=10332&action=3&NewsID=3147.

View a demonstration of the OCAS technology:  http://www.ocas-as.no/us/

Why, then, did Pattern renege on its promise to residents and instead, install red lights that flash on and off incessantly all night long?

Ewing added, “We are sick and tired of the bright red blinking lights at night.  The disruption to our lives is beyond believable.  The turbines will be removed, but until that day, the radar controlled warning lighting system needs to be operational, exactly like John Calloway of Pattern Energy stated.  We don't care what the cost is, there are no further excuses.” 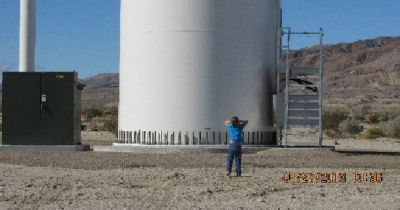 Jim Pelley, along with Ewing, has been documented on video the severity of the flashing lights as well as lack of wind most days. But on occasions when the wind does become gusty, noise problems are also plaguing residents, as a photo of a small child near a turbine suggests.

“The little kid got out of the vehicle he was riding in and immediately covered his ears, no one told him to do it he did it on his own,” Pelley said. “The kid left his hands over his ears until he got back in the jeep; the sound was hurting his sensitive ears.”

Pelley lives just half a mile from this turbine. “It sounds like a jet taking off. We used to sleep with our windows open. Now I have to close my whole house up tight to avoid the noise and BRIGHT RED flashing light shinning in my face at my dinner table.”

As with the lighting issue, Pattern’s descriptions in hearings minimized noise concerns.

“We were told that the sound levels would be like being in a `quiet library’”, Pelley recalled. “This is far from the truth. Living in the middle of this project has been living Hell since day one and I feel that all of the people who should be looking out for the health, safety and well being of the residents/public  are holding a blind eye to this project.”

ECM has contacted the Bureau of Land Management to ask what steps the agency plans to take, if any, to mitigate this nuisance and force Pattern to install the lighting system that will keep lights off unless a plane approaches and restore darkness to the desert at night. We will publish the BLM reply once received.

Just one more in the long list of lies told both about this development and wind farms in general. But that's hardly surprising given the clock they were racing against to build it. Had Romney won, it's unlikely the massive subsidies required by these preposterously inefficient, expensive, environmental catastrophes would've still been been available. They went up almost overnight. But now that Obama's won, they can relax; the pressure's off, and the rape of the wilderness will continue apace.