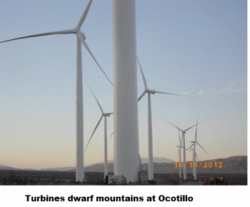 May 29, 2015 (Ocotillo) – Last year, our award-winning investigative story, Was It Fraud?  raised serious questions over why Pattern Energy’s Ocotillo Wind Energy Facility produced only 15% capacity factor in 2013—far less than the 34 percent capacity factor that Pattern promised the federal government in order to obtain lucrative federal subsidies. Even after accounting for time when a fallen blade shut down the project, capacity factor for the remaining months still averaged less than 19 percent.

Now, the figures are in for 2014—and the Ocotillo wind project again under-performed, this time reaching 24 percent capacity factor: 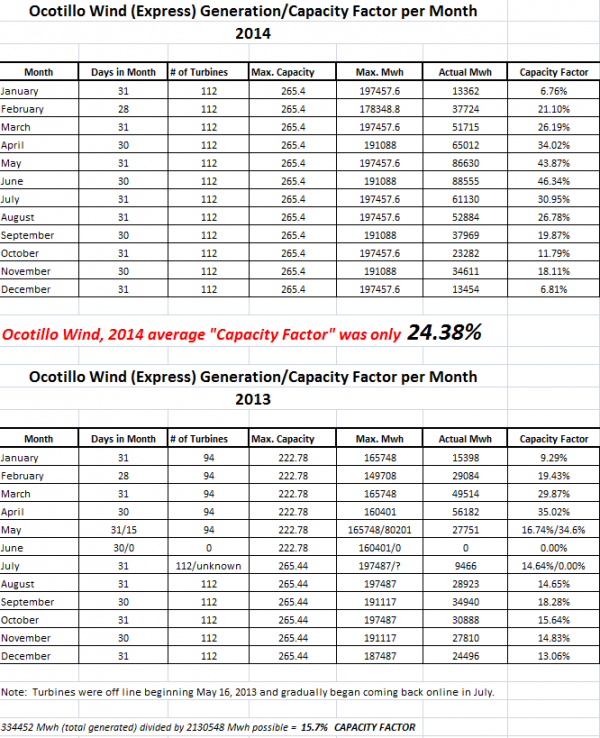 Only 3 months (April, May and June) exceeded the 34% that Pattern predicted, one just barely. The rest fell short—in some cases by huge margins.  Two months produced less than 7% capacity factor, for example.

International energy expert Nicolas Boccard predicted before the project was built that the site did not have enough wind to sustain a wind project.  After the first-year figures proved his prediction was accurate, Boccard told ECM the federal government appeared to have enough evidence to pursue a false claims action against Pattern.

Maps submitted by Pattern to win approval made it appear the project would be located at an elevation 3,000 feet higher than the actual site, as documents published by ECM last year proved. 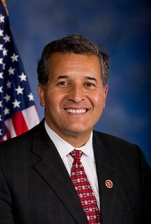 We brought these issues to the attention of Congressman Juan Vargas, who represents the community of Ocotillo as well as East County. After we forwarded analysis of the wind data for Ocotillo’s first year, along with other documentation such as the claims of map falsification and more, we received a response from Dianna Zamora in Rep. Vargas’ office in Washington D.C. on March 1, 2014.

“I would like to thank you and our constituents, as it is clear that you did your due diligence,” she stated. The Congressman takes any accusations of impropriety or fraud very seriously. He has reached out to the Department of Energy to share with them the information you have provided.”  She added that Vargas has asked the best method for evaluating the information to “determine if any wrongdoing has occurred,” she added, promising to get back to us “as soon as we hear details of the Department’s evaluation.”

But more than a year later, no additional response has been received. Meanwhile, Pattern continues to receive subsidies for each megawatt of power that it does produce, with zero accountability for building a wind project on a site that the federal government’s own wind resource map showed was substandard for an industrial-scale wind energy facility.

Nor is this the only indication of misleading claims made by Pattern.  ECM has previously documented dubious claims made about earthquake seismic safety, distances from homes and earthquake faults, avian radar,  health, safety and jobs, and wildlife issues at a project that has also been linked to Dust Bowl-scale dust storms and pollution of Ocotillo waterways and residential areas with a flammable dust suppression chemical.

The company also drew criticism from multiple Native American tribes for desecrating sacred sites and burial grounds.  In addition, the project also destroyed groves of century-old Ocotillo plants for which the town was named, left residents plagued by noise and flashing red lights from turbines shining in their windows all night long, lost views on “protected” public land surrounding the town, and plummeting property values.

the project was a government tax give away to start with ... better to tear it down and leave the foundations in place .... the desert will take over if given time and nature can come back to where it belongs

Now that the FACTS are in, how long do we have to wait? The right thing to do would be to tear it down. The wrong thing to do is nothing. We can do better than this!!!

This project is a complete failure and needs to be decommissioned ASAP! They missed the mark, tear it down now! Brian Mooney uses the Ocotillo Wind Project as an example of a project that does not pass the viability test. https://www.youtube.com/watch?v=PutxauIzyUM