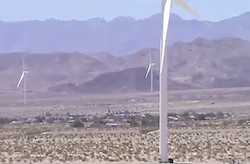 That morning I had posted a press release called, “A Year Later, SDG&E’s Sunrise  Powerlink Delivering on What it was designed to do.” It was up for hours before it dawned on me that anyone reading the title, but not opening the article, would assume it comes from San Diego Loves Green. So I changed the title to “SDG&E says Sunrise Powerlink is delivering on what it was designed to Do.” The most important part of the article was a paragraph in which SDG&E described the projects already feeding the grid:

“Of these contracts, ten renewable projects – equivalent to more than 1,200 MW – are located in Imperial County.  Pattern Energy’s 265 MW Ocotillo Wind project connected to the grid just this past December and Tenaska’s Imperial Solar Energy Center South was energized in April.  Several more solar projects are under construction in Imperial County and are expected to be energized later this year and next year.  Additionally, the NRG Borrego solar project located in San Diego County started commercial operation last February.”

Note that there are three projects connected to the grid – Ocotillo, Tenaska and Borrego -  and one is left with the impression they are all producing energy.

When I checked my email, at 10 pm, I found a link to the video below. I suspect that Jim Pelley, who lives in Ocotillo, wanted me to know what he thinks of SDG&E’s press release.

There is a picture of Ocotillo at the top of the page. As you can see, it is surrounded by 500 foot high wind turbines. Jim does not want those turbines there. As far as I can ascertain, very few of the people in rural areas like Ocotillo welcome the industrial scale wind and solar projects being thrust among them. If any other industry were to try this, the inhabitants of Ocotillo would probably have been able to stop them, but the Federal and State Governments are pushing renewable energy and these turbines are sitting on public land. So the only recourse left to the people of Ocotillo, and other rural communities like them, is to fight these turbines on specific issues – and in the process be labelled as “anti-wind” by  the industry.

Jim happens to be a photographer  and took it upon himself to chronicle the Ocotillo Wind project’s progress in a series of videos that are posted on a youtube site called “Save Ocotillo.”

There are some references to the wind turbines spinning, and noise that deprives Jim of sleep, but far more – somewhere between 100 and 200 videos – record problems at the Wind Farm.

Jim says the developer, Pattern Energy, ripped up over 46 acres of desert to install access roads. As a result, there are dust storms when the winds are strong. The image to the right was taken from Jim’s back yard. You can hear him coughing, in the video I took it from, as he retreats back inside his home.

The wind turbine blades are still in most of the videos at “Save Ocotillo.” A quick glance over the titles suffices to explain why. The vast majority record wind speeds of 0 to 4 mph, which is not enough to spin the giant turbine’s blades. If the blades are not turning, no energy is being produced and the turbines are not sending any energy to the grid. In fact the turbines draw energy from the grid to maintain their systems.

The Ocotillo Wind Farm has been offline since May 16, when one of the turbines threw one of its 173 foot long blades. Someone from SDG&E told me the project will be operational again sometime next week.

When I mentioned that the videos from “Save Ocotillo” showed the turbines idle most of the time,  he said, “Ocotillo has been producing 222 megawatts (MW) since it went online in December.” Pressed for details, he suggested I contact Pattern Energy for more specific information.

An electrical engineer friend subsequently informed me that megawatts are a measure of power, not duration, and SDG&E’s statement would be true if, for example, Ocotillo were to produce 222 MW for an hour on any given day. So when SDG&E said this project would power 125,000 homes they probably did not mean real homes, but were using this figure as a pictorial illustration of the amount of energy this project can power during ideal conditions.

That actually makes sense, given the intermittent nature of wind energy (my engineer friend did not raise an eyebrow), but is confusing those of us who think literally. When SDG&E said this project can power 125,000 homes, we expected it to supply ALL the energy needed for 125,000 homes! Misunderstandings like this do not help their credibility, especially among a population which is being forced to watch the transformation of their backyard into an industrial development.

There have been numerous lawsuits, as Environmentalists, Ocotillo residents and the local Quechan Indians have all tried to stop this project.

After the failure of one attempt, Helena Arrow-weed told East County Magazine, “This was a case based on deception, greed, and misinformation about jobs, money, and energy. The case is part of a negligent, irresponsible and ambitious national plan to change from fossil fuels to “renewable” resources.  It is a plan that, because of poor planning, will destroy much of what environmentalists and Native Americans have been struggling to protect and preserve for decades. It is a price too high to pay for “renewable” resources in my opinion. I believe there are better answers for this problem.”

The 12,000 acre Ocotillo Wind Project site sits in the middle of an area the Quechan call “the Valley of Death.” The California Native American Heritage Commission recently recognized it as a sacred Native American cultural landscape and burial ground. Had they made this ruling earlier, it might have prevented the Ocotillo Wind Farm from coming into being. 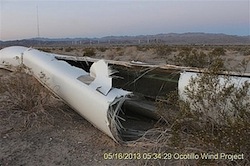 I have not seen the official figures, but find it difficult to believe this $600 million wind farm will produce half the energy needed to power 125,000 homes (Real homes, not some abstract equation). Will it supply 1/4 of this? Pattern Energy is said to have done three years of Wind studies before building Ocotillo and presumably must have known about the sacristy of wind. So why did they build a Wind Farm at Ocotillo?

In a devastating commentary entitled “Wind-Power Subsidies? No Thanks,” Patrick Jenevein of the Tang Energy Group recently explained why his company is curtailing further investment in this sector. The industry is being driven by politics, rather than economics. Jenevein claims that Wind energy makes sense in Texas but not California – which is not in the “wind belt” and has only become America’s second-largest wind energy producer because of the state’s aggressive energy policies. He added that America’s current Wind Energy boom is the result of Federal grants and tax credits that enable Wind developers to recoup up to 30% of their capital investment. If there were no subsidies, developers would be more selective when they chose prospective sites.

I wonder if there would be an Ocotillo Wind Farm, were it not for those Federal subsidies.

I have no reason to entertain similar doubts about the power supplied by SDG&E’s other contracts, or enough data to know whether they will collectively deliver 1,200 MW on anything resembling a constant basis. All I know is that the Ocotillo Wind Farm does not appear to be delivering the energy they said it would and the people of Ocotillo do not want these massive turbines anyway.