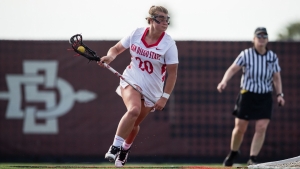 February 20, 2020 (San Diego) - In a back-and-forth home opener at Aztec Lacrosse Field, it was three SDSU goals in the final 1:25 of the game from senior Emily Resnick and freshman Camdyn O’Donnell that sealed the deal for the Aztecs as they won their first game of 2020 in a 19-18 defeat of Arizona State Thursday afternoon.

“I saw grit, I saw competitiveness, I saw composure—they didn’t back down,” noted head coach Kylee White when asked about the Aztecs’ efforts. “There might have been a lull in the middle, but they came back to the game plan and (showed me that they) felt confident in their abilities today.”

Senior Lexi Tan led the Aztecs’ (1-1) scoring attack with six goals, tied for the third-most in a game in program history. O’Donnell scored four goals in just her second collegiate game, including the two crucial two scores with 48 and 24 seconds left that secured the victory for SDSU. The Poway, Calif. native added three assists to lead all Aztecs with seven points scored, tied for the third-most in a single competition in Aztec history.

Resnick had a hat trick and three assists of her own for a six-point performance, impressing in just her second game donning the Scarlet and Black. Throughout the content, the Aztecs saw goals from junior Bailey Brown (2), senior Morgan Taylor (2), senior Taylor Sullivan (1) and sophomore Cailin Young (1) to total the most goals scored by the team since its 20-8 victory over Bucknell on March 13, 2019.

Young tallied 10 draw controls against the Sun Devils, tied for the second-most in a game in SDSU history, while adding a goal and a ground ball to round out her solid performance against ASU. MPSF Defensive Player of the Week and redshirt senior Katy Sharretts continued her success from the Aztecs’ season opener against Stanford, tallying six ground balls and seven saves against ASU to earn her first win of 2020.

ASU (2-2) was led by redshirt senior Kerri Clayton who recorded six goals and three assists for a nine-point effort against the Aztecs. Junior Maddie Hunter recorded a hat trick and a ground ball while reigning Pac-12 Offensive Player of the Week Emily Glagolev had a six-point performance with two goals and four assists as well as two ground balls, a caused turnover and a draw control.

With the Sun Devils out to an early 3-0 lead, senior Lexi Tan opened the scoring for the Aztecs with a goal assisted by junior Bailey Brown with 26:52 left in the first half. SDSU then tied the game with an unassisted goal from O’Donnell and a shot to the back of the net from Sullivan assisted by Sheehan.  Resnick then gave the Aztecs their first lead of the game with a score assisted by standout freshman O’Donnell to give SDSU four unanswered points and a 4-3 lead after an early ASU run.

The Sun Devils quickly responded, adding three straight goals of their own to give them a 6-4 lead.

SDSU quickly stormed back to tie the game six-all thanks to Resnick and Tan both scoring their second goals of the day. ASU stormed back with three-straight goals, but Tan quieted the Sun Devils with her third and fourth scores of the day to bring the Aztecs within one goal with 48 seconds left in the half. Arizona State got the final word in the first half, sending the teams into the locker room with the score at 10-8.

Morgan Taylor started the Aztecs’ second-half attack with her first score of the game, making the score 10-9 with 26:15 left in the first. Bailey Brown tied the game up again with a free position shot just a minute later, her first score of the season. Tan added her fifth score of the day to give the Scarlet and Black their first lead of the second half 40 seconds later. Cailin Young found the back of the net for the first time in 2020 to grow SDSU’s lead to two points off four unanswered scores.

ASU would not be silenced for long and responded with a free position make, sending the score to 12-11 Aztecs. Taylor continued her second-half success shortly after with a goal assisted by Resnick to bring the SDSU lead back to two. The lead didn’t last long as the Sun Devils quickly added three points to the board with three-straight scores to give the advantage to the visitors.

Tan added her sixth score of the day once the Aztecs lost their lead, tying the game at 14 all. Brown then followed and found the back of the net for the second time to hand SDSU back a one-point lead. Another short-lived lead occurred as ASU responded with three consecutive goals to send the score to 17-15 Sun Devils.

With 3:31 left to play, an unassisted goal by Camdyn O’Donnell brought the score to 17-16 Sun Devils, the 14th one-goal score of the game. The Sun Devils would score one more goal to capture their final lead of the day, 18-16, with 2:30 left to play in the game. Three unanswered scores gave the Aztecs the victory.