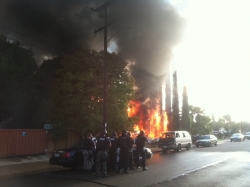 Update August 22, 2011 12:30 a.m. - A manhunt continues for a suspect identified as Kevin Collier.  10 News reports that Collier may have eluded authorities after killing two families members and wounding an El Cajon police officer.

Update 10:15 p.m. - Bodies are reportedly confirmed in the residence but the scene is still too hot to enter, ECM has learned.  Chillingly, the suspect held a yard sale the day before gunning down his family members, advertising on Craig's list, "Big yard sale. Everything you need for your kitchen and more! Name your own price I just want the stuff gone!!!"

Update 8:50 p.m.:  KOGO reports suspect remains at large and a manhunt is underway; it is unclear whether suspect is inside home or not. Suspect is tall with red hair, green eyes and fair complexion.

Update 7 p.m.  Officer is in stable condition.   SWAT team members are setting up a perimeter.

Update 6:20:  At least 2 other people have been shot, multiple news outlets report. Both are reportedly female relatives of the suspect, including a child. 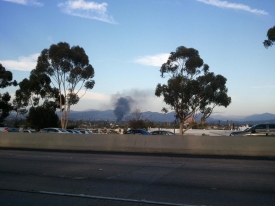 August 21, 2011 (El Cajon) – SWAT officers are surrounding a residence at 1033 Prince Street in El Cajon, where a suspect has reportedly fired multiple shots at officers and family members, then set fire to the home. A police officer was shot in the neck and an air ambulance has been requested. Hostages have also been taken, Incident Page Network reports.

Prince Street is located off First Street just east of I-8.

If you are not yet signed up to receive free Viejas Wilidfire & Emergency Alerts, sign up free at the top right side of our homepage. You may also receive a free weekly copy of East County Magazine with top news and events from our region.