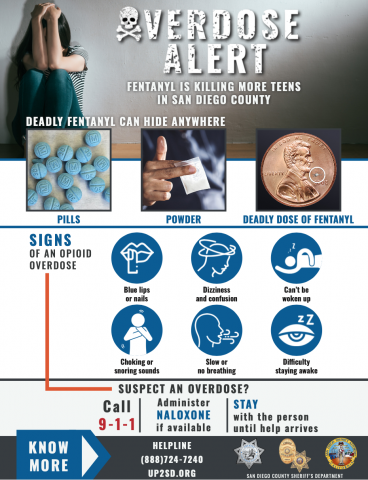 “Parents are finding their children dead from fentanyl overdoses, boyfriends finding their girlfriends dead, and children are being put at risk by this alarming spike,” said DA Summer Stephan.

June 21, 2021 (San Diego) -- The top law enforcement leaders in San Diego County are sounding the alarm about a concerning increase in overdose deaths related to fentanyl, especially among younger people. The San Diego County District Attorney’s Office, Sheriff’s Department and Police Chiefs’ and Sheriff’s Association are pushing out the warning on social media in an effort to educate youth and parents that if the pill you’re taking didn’t come from a pharmacy, it could kill you.

The District Attorney’s Office is part of the Narcotics Task Force Team 10, which responds to an average of 5 to 6 calls per week; most of them fatal overdoses and most involving a fentanyl-related overdose. The deaths are occurring in every part of the county and affecting every demographic.

“Parents are finding their children dead from fentanyl overdoses, boyfriends finding their girlfriends dead, and children are being put at risk by this alarming spike,” said DA Summer Stephan. “We’ve been sounding this alarm for years but the problem is only getting worse. Our office continues to focus on awareness campaigns while at the same time stepping up our prosecutions of street dealers who know their product is suspect in an attempt to try and save lives. Fentanyl laced drugs continue to be sold on the streets and we need to get the word out that you never know what you’re taking if it’s not from a pharmacy.”

“Our mission is to save lives,” said Sheriff Bill Gore. “Sheriff's Deputies were the first in the Western United States to carry a nasal spray called Naloxone to counter the effects of an opioid overdose. So far this year, we have saved 59 people from overdosing. These are people deputies and medical staff have encountered on patrol, courthouses and our jails. We also offer safe options to get rid of expired, unused and unwanted medication. No questions asked. Go to sdsheriff.gov to find a Sheriff's drop box location near you. Now more than ever, we must stay alert against drug misuse and abuse.”

In January of this year, an active firefighter overdosed and died from fentanyl.  In February, two women in Point Loma smoked what they thought was methamphetamine and went to bed. The methamphetamine turned out to have been mixed with fentanyl. One of the women woke up the next morning; the other did not.

In February of this year, an 8-month-old baby was treated at Rady’s Children Hospital after having ingested fentanyl while in the care of his mother and her boyfriend.  Administration of Naloxone by hospital staff saved the baby’s life.  The mother and her boyfriend, both with a history of drug use, are charged with felony child endangerment.

When appropriate, criminal charges are also filed against dealers whose sales result in an overdose death. Depending on the circumstances, these charges range from the sale of fentanyl causing great bodily injury to murder.  There are currently three defendants charged with a total of four murders for having sold fentanyl that resulted in deaths.

"As first responders, law enforcement officers see firsthand the destruction of drug overdose and the devastation it causes to families," said Roxanna Kennedy, President of the San Diego County Police Chiefs' and Sheriff's Association. "People are dying every day. That’s why San Diego County law enforcement leaders are committed to bringing awareness to this issue. We all need to work together to educate our community including parents and young people."

The District Attorney’s Office joined forces with the Health and Human Services Agency to launch a large scale outreach campaign last year, The San Diego Opioid Project, which included messaging about laced substances that can include deadly fentanyl.