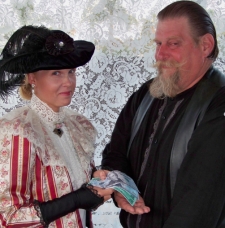 September 16, 2011 (Lemon Grove)--In the midst of the Great Depression, two Lemon Grove members of San Diego Community Theatre (forerunner to the Old Globe) charged out of San Diego State College (today, SDSU) armed with Theatre and English degrees only to confront what so many graduates confront today--a dismal economy and no jobs, especially for artists.

Unfazed, Amorita Treganza and her new husband, Robert Turnbull III, launched the Lemon Grove Theatre Guild, 1934-36, and produced their own and others' one-act plays and concert readings. The 1909 Forward Club between Main and Olive Streets in Lemon Grove was the frequent site of their productions.

Now the Lemon Grove Historical Society (of which Treganza was a founder and charter member) recreates those brave days, in the midst of a contemporary depression, with a production of the one-act melodrama, "He Ain't Done Right by Nell!".

Written by Wilbur Braun, the play has been adapted by Helen Ofield to reflect the agricultural heyday of Lemon Grove replete with names of pioneer ranchers and references to local buildings and citrus culture. The play will run on a double with "On the Loose in Baja" for six performances -- three of them in the 1909 Forward Club, known today as "Sonshine Hall" on the campus of First Baptist Church, 2910 Main Street.

"We're doing what Treganza and Turnbull did and that is bring theatre at modest cost to a hometown audience during lean times, showcase the talents in our midst, utilize two local historic sites for performances, and celebrate the legacy of two notable Lemon Grovians," said Helen Ofield, president of the Lemon Grove Historical Society and the show's producer.

What became of Treganza and Turnbull? Their marriage ended in 1936, but not their lifelong friendship. He followed his father, Robert Turnbull II, as a Foley wizard at Warner Brothers and she continued to work with Craig Noel at the Old Globe while becoming a pioneering children's eye doctor. She rose to fame as the first woman to head a national medical organization.

"On the Loose in Baja" is excerpted from Treganza's vivid memoir of travels in Baja California with the Flying Samaritans and her second husband, ophthalmologist Dr. Lloyd Adams. Helen Ofield and Corky Lang will perform the concert reading of "Baja."