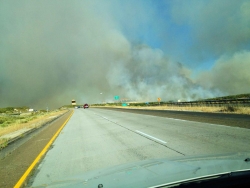 June 20, 2012 (Campo) – The Old Fire has charred 995 acres and is now 90% contained.  One residence burned, as well as a recreational vehicle (RV).  Cause remains under investigation, however electrical and lighting have been ruled out. There are no electrical lines near the origin of the blaze on the Campo Indian Reservation, nor were there any reports of lightning, Cal Fire reports.

All evacuations have been lifted. Church Road is open through the Campo Indian Reservation only to residents from Old Highway 80 to one mile north of Highway 94. Old Highway 80 was reopened yesterday.

Overnight crews continued mop up activities last night, however no active fire was observed amid gusty winds.  Firefighters will patrol the area today and mop up any hot spots.

A total of 643 personnel have been assigned to the fire, including 65 fire engines, 19 crews, 2 airtankers, 3 helicopters, 7 water tenders, and 1 bulldozer.