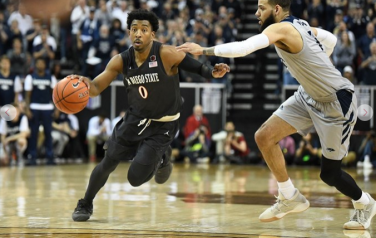 San Diego State also had a home victory over Nevada on Feb. 20.

Cody Martin led the top-seeded Wolf Pack (29-4) with 16 points and six rebounds, and Tre'Shawn Thurman had 11 points and 11 rebounds. Nevada forward Jordan Caroline, averaging 17.3 points and 9.6 rebounds, did not play due to an injury.

Nevada responded with an 18-4 run that included Caleb Martin's first point and first field goal, a 3-pointer with 12:01 left. Nevada took the lead on Cody Martin's fast-break layup with 10:02 left.

The Aztecs will face off against the Fresno State-Utah State winner in the championship game Saturday at 3:00 p.m.