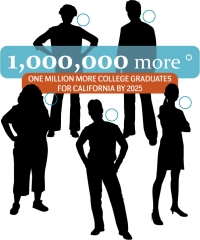 Event will honor over 13,000 California students and 200 scholarship winners who participated in "Save me a spot for college"

September 18, 2010 (Otay) -- The Campaign for College Opportunity will host a “One Million More Awards Reception” at the Pavilion at Otay Ranch High School in Chula Vista beginning at 4:30 p.m. on Tuesday, September 21.

The event will launch the “One Million More College Graduates by 2025” (1MM) campaign, an unprecedented effort that rallies Californians in support of increasing college-going and graduation rates.

At the event, The Campaign will kick off its 1MM Campaign for San Diego by having participants sign a pledge urging the next Governor to put forward a specific plan to produce 1 million more college graduates by prioritizing and investing in higher education in order to produce jobs, meet the state’s workforce needs, and strengthen its economy. San Diego State University President Stephen L. Weber is among the prominent Californians who have signed the pledge.

At the event, a ceremonial check of $5.3 billion will be presented to state leaders, documenting the return on investment that California can receive by producing 1 million more college graduates by 2025.

“The next Governor needs to have a plan for improving the state’s economy and creating jobs,” said Michele Siqueiros, executive director of The Campaign for College Opportunity, “and that will require a plan to invest in college opportunity and increase college graduation rates.”

A highlight of the day will be the awarding of scholarships to middle and high school students from the San Diego region who were selected as winners of this year’s Save Me a Spot in College scholarship contest. Each of these students will be holding a mock $1 million bill, reflecting the $1 million more that they will earn over their lifetime if they earn a college degree versus their peers who only graduate from high school.

During the past five years, more than 53,000 students have made their voices heard by participating in the scholarship contest, which provides students from throughout California the opportunity to create written word, posters, and TV ads calling on state leaders to save them and their peers a spot in college. The scholarship contest is supported by major funding from the College Access Foundation and the Vons Foundation.

“Higher education is the fuel that feeds the economic engine in our state and helps Californians realize the American Dream,” Siqueiros said. “We need to let all Californians know about the vital role higher education plays in creating jobs and strengthening our economy while ensuring that our children have even greater opportunities than we have had.”

The Campaign for College Opportunity is a broad-based, bipartisan coalition, including business, education and labor leaders, and is dedicated to ensuring the next generation of Californians has the opportunity to go to college. The Campaign works to create an environment of change and lead the state toward effective policy solutions. It is focused upon substantially increasing the number of students attending two- and four-year colleges in the state and significantly impacting the rate that students succeed and achieve their post‐secondary education objectives. For more information, visit: www.collegecampaign.org.