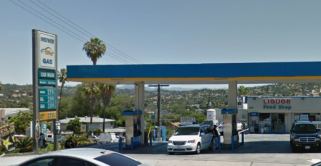 “There were several other witnesses inside the business at the time of the robbery,” said Sergeant Matt Cook with the San Diego Sheriff’s department.  After the clerk handed cash to the suspects, they fled on foot eastbound on Troy Street.

A deputy spotted both suspects near Tyler Street and Central Avenue, but they fled in separate directions. The Hispanic male was apprehended and identified as Angel Virgen, 18. He is charged with robbery, conspiracy, making criminal threats and assault with a deadly weapon, among other charges.

The other suspect remains at large.  The investigation is ongoing and will be followed up on by detectives from the Rancho San Diego Sheriff’ station.

If you have information on this crime, call Crime Stoppers at (888)580-8477. You can remain anonymous and be eligible for up to a $1,000 reward for information leading to a felony arrest.