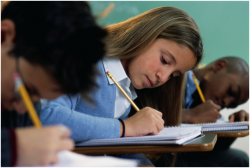 February 23, 2012 (Sacramento)—State Superintendent of Public Instruction Tom Torlakson warned today that the latest review of school district budgets shows that one-third of public school students in California attend a district in financial jeopardy. That includes seven districts in San Diego County—three of them in East County.

The state’s First Interim Status Report for fiscal year 2011-12 indicates that 127 districts are either in negative or qualified financial status, totaling 17 more than at this point last year. Combined, nearly 2 million students attend school in a district with serious financial challenges.

"The financial emergency facing our schools remains both wide and deep,” Torlakson said. “The deep cuts made to school funding—and looming uncertainties about the future—are driving school districts to the brink of insolvency. Plain and simple, our schools need new revenues to get back on solid financial ground.”

The California Department of Education semiannually receives Interim Status Reports on the financial status of the state's 1,037 local educational agencies (LEA), comprised of school districts, county offices of education, and joint powers agencies. The certifications are classified as positive, qualified, or negative. The new report shows seven districts in negative certification and 120 as qualified.

A negative certification—the most serious of the classifications—is assigned when a district will be unable to meet its financial obligations for the remainder of the current year or for the subsequent fiscal year. This certification means the LEA's county office of education may intervene in the LEA's finances.

A qualified certification is assigned when the district may not meet its financial obligations for the current or two subsequent fiscal years. This certification allows the LEA's county office of education to provide assistance to the LEA.

A positive certification is assigned when the district will meet its financial obligations for the current and two subsequent fiscal years.

The number of districts in qualified or negative status declined slightly from last June when the Second Interim Status Report for FY 2010-11 was issued, but overall remain at historic highs. As late as 2006-07, only 22 districts were in negative or qualified status at any time during the fiscal year.

This new list is a compilation of the certifications of First Interim Status Reports by LEAs that were due December 15, 2011, and cover the financial and budgetary status of the districts for the period ending October 31, 2011. The certifications reflect whether the LEA is able to meet its financial obligations for the remainder of the current fiscal year and subsequent two fiscal years, based on projections at that point in time.

For more information and a list of LEAs on the first Interim Status Report, please visit the http://www.cde.ca.gov/fg/fi/ir/interimstatus.asp.