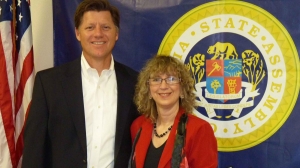 April 20, 2012 (Sacramento) – AB 1902, authored by Brian Jones, did not muster sufficient votes to pass out of the Assembly Local Government Committee on Wednesday.   Introduced at the request of East County Magazine, the bill would allow online media to run paid public notices, such as new business announcements.

In his statement, Assemblyman Jones told Committee members that permitting online publications to post public notices is a” reasonable response to changing technology.” He noted that “California is customarily on the cutting edge of supporting new technologies and industries—and the online news business is both.”

The measure drew opposition from the print newspaper industry and support from online publications, business groups and dozens of individuals who sent letters to legislators.

Some committee members voiced support for the concept, but suggested amendments be made to tighten the language and assure that Internet sites running public notices are also publishing substantial amounts of local community news.

While the bill contained some protections, Assemblyman Jones and East County Magazine editor Miriam Raftery agreed to work with stakeholders including large online news providers such as AOL, publisher of Patch.com news sites, to craft improved language that will address legitimate issues while assuring fair and equitable access to public notices for the growing number of readers who now access news online.

According to the Pew Research Project for Excellence in Journalism, digital media was the only media sector seeing audience growth in 2010. Moreover, more readers said they seek online news sources at least three times a week (46%) than print newspapers (40%) .  A State of the News Media report, moreover, found that nearly half (47%) now said they access local news on mobile wireless devices such as cell phones and iPADs.

If you wish to voice support for this measure, contact editior@eastcountymagazine.org.