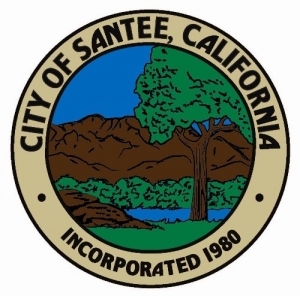 August 23, 2016 (Santee) — Long-time Mayor Randy Voepel is running for the state Assembly and is not seeking reelection.  Two Council members are running to lead the city as Mayor: retired police detective John Minto real estate/mortgage professional Rob McNelis.  A special selection will be held to fill the Council seat of whoever wins the mayoral race, since these terms are not expired.

In addition, three candidates are running for the Council seat being vacated by Jack Dale, who is retiring.  Stephen Houlahan is president and co-founder of Save Mission Trails, which led the successful effort to stop the Quail Brush gas-fired power plant. He is also a registered nurse. Dustin Trotter, a carpenter, owns a door and trim company and has been an active community volunteer in organizations such as the Santee Santas and Santee Food Bank. Mason Herron is legislative director for Assemblyman Brian Jones and has also worked as a policy consultant.

These races are nonpartisan and thus far neither the Republican nor Democratic parties have endorsed canddates for Santee Mayor or Council seats, though some candidates have endorsement from prominent political figures.

Rob McNelis has been a Santee resident since 1994. He is married to his high school sweetheart and has raised two children in Santee who attend Santee schools. Rob has been very involved in Santee since 1998. He’s been Chamber President, Assembly District Business of the Year, Collaborator of the Year for the Santee School District and named Santee Citizen of the Year. Since election to Council, he established the first full time dog parks, kept Santee business friendly, responsibly addressed transient issues and stays personally accessible to citizens and business owners alike. He is dedicated to working within the city’s annual budget to meet the needs of the community without new taxes. This can and will be done by spending responsibly on the items local government is supposed to provide; e.g., fixing potholes, streetlights and providing public safety rather than “pet projects” that only serve special interests. Rob’s top priorities are mitigating traffic congestion, keeping Santee sales tax low, repairing our roads, providing for Senior services, keeping our parks and community safe; and, most importantly, keeping local government out of your home and out of your wallet. Please vote for Rob McNelis for Mayor! Always “Santee Proud!”

I have served the City of Santee as your Council Member for the past 14-years and have listened carefully to your concerns and expectations. My 29-year career with the San Diego Police Department trained me to be a proactive problem solver. I serve on seven boards, commissions and committees, chairing two of them. I have the experience and proven track record of leadership, loyalty and dedication to our community.

I possess the skills and ability needed to lead Santee into its next era of prosperity, responsible growth and potential.

I am always working to improve traffic, repair curbs, sidewalks, potholes and street lighting. I will continue to work tirelessly to keep Santee one of the safest cities in San Diego County.

My wife and I have called Santee home since 1992 and you can usually find us enjoying the Santee Street Fair, Bluegrass Festival, Fourth of July, and Summer Concert Series.

I promise to hold myself to the highest level of integrity required of the Office of the Mayor of Santee.

I am running for Santee City Council to bring a new generation of leadership to Santee. I will work to protect and enhance our quality of life, build on the city’s progress, and help implement a vision for the future.

As a District Director for the State Legislature, I have worked directly with constituents to solve problems, engage in the legislative process, and serve as a liaison between our community and the state.

In the private sector, I have been a consultant on a range of issues including law enforcement, water sustainability, small business advocacy, and other critical policy areas.

I will draw on these experiences to grow our local economy, implement balanced budgets, keep taxes low, maintain low pension liabilities, and upgrade our infrastructure. I will also work to support and improve amenities that strengthen our quality of life such as parks, roads, and public safety services.

I have worked to serve this community as a member of the Santee Kiwanis, Santee-Lakeside Rotary, and Santee Parks and Recreation Committee.

I am proud to be endorsed by Mayor Randy Voepel, Supervisor Dianne Jacob, and the Deputy Sheriffs’ Association of San Diego.

I would be honored to have your vote.

Stephen Houlahan has a proven record of leadership that places Santee residents and their neighborhoods first!

Houlahan, as President and Co-founder of Save Mission Trails fought the ugly Quail Brush power plant resulting in its defeat and worked for the successful designation of SR-52 as a Scenic Highway.

Vote Houlahan. Residents need a councilmember that won’t buckle under pressure from out of town profiteers.

Houlahan stands firm against extreme proposals that would sell out Santee’s quality-of-life and further gridlock our roads.

Houlahan insists that traffic solutions must be in place before allowing more large traffic generating subdivisions.

Houlahan practices fiscal restraint. He is a Registered Nurse that holds a Master of Science and Master of Business Administration.

As a Registered Nurse, Houlahan does not have conflicts of interest, such as others who seek office for personal gain.

Houlahan is a West Hills graduate, a third generation resident, a father and a husband who loves Santee! Like most of you, he must drive on SR-52.

Houlahan will fight for police and firefighters, strong local businesses, excellent schools and parks while protecting our neighborhoods.

Dustin Trotter is a business owner who built his company from the ground up through hard work and dedication and he brings that same level of commitment to his numerous volunteer works across the City of Santee.

Starting his career in carpentry at the age of 18, he quickly learned the trade moving into foreman by the age of 21. In 2005, at age 25, he founded Trotter Door and Trim.

Over the past 18 years, through hands on management and close customer and vendor relationships, Dustin has developed the company into one of the premier general contracting firms in Santee.

Dustin has an extensive community advocate and volunteer record. He is an active member of the Santee Santas program, Santee Foodbank, Guardian Angels Church, Santee Parks and Recreation Committee, Santee Lakes Foundation, and an appointed member of the Community Oriented Policing Committee.

When he is not working or volunteering he spends time with his family; wife Genny and kids Kayla and Jaden. Elect a man who has dedicated his life to Santee. Elect Dustin Trotter to Santee City Council.