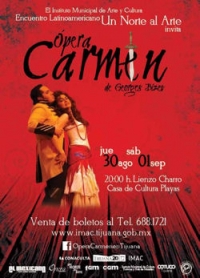 Update: All of the tickets for Carmen have sold out.
August 28. 2012 (Tijuana) -- One of the most famous operas in the world, Carmen, by George Bizet will be performed in Tijuana, Mexico at the Playas de Tijuana inside the rodeo arena on August 30, and September 1 at 8:00 p.m. The opera is sponsored by Tijuana's Municipal Institute of Art and Culture (IMAC) and Mexico’s National Council for Culture and the Arts.
The event is being  held as part of the celebrations organized to commemorate the anniversary of the founding CXXIII city of Tijuana.
The music director for Carmen is Armando Pesqueira, with the cast and crew: baritone Amed Liévanos (Escamillo), mezzo soprano Grace Echauri (Carmen), stage director José Medina, soprano Monica Abrego (Micaela), and tenor José Luis Duval (Don José). The Tijuana Opera Chorus and the Baja California Orchestra will also accompany the performances.
Prior to the Carmen performances, there will be a Sevillian Festival featuring tapas, wine, paella, beer, Spanish shawls, fans, castanets and hair combs.