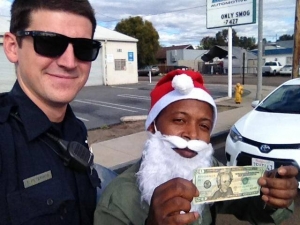 January 1, 2015 (El Cajon)—On Christmas Eve and Christmas Day, El Cajon Police officers stopped 10 people—but instead of giving them tickets, they handed them  cash—thanks to two anonymous donors who gave the police money to help people in the community—and improve the way the community views law enforcement. 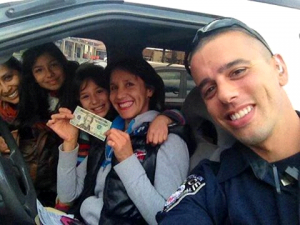 “It was an awesome experience,” says Officer Travis Howard, Vice President of the El Cajon Police Officers Association. We interviewed Officer Howard on our radio show, along with Officer Samson Pak.

The first donor was a man who smiled, handed a folded paper to El Cajon Police Officer Travis Howard on December 23rd outside the ECPD’s storefront at Parkway Plaza.  Inside, he found $100 cash and a note from this “Secret Santa”, which read:

“Dear Officer: The media has not done the greatest job in showing all the good you do on a day to day basis—risk your life, fight crime, protect the innocent, save kids from abuse, etc. Please take this money and   stop five random people who you think could use it. An officer of the law always sees people at their worst. I hope you get joy with this humble offering Pull them over, tell them that they have been targeted, and then hand them $20. Wish them a merry Christmas.  My desire is that people will look at my police force differently someday. At least five people will. .Merry Christmas.”

Officers are not allowed to accept money from the public, but since the man had already left and wanted to improve officers’ relations with the community, the department decided to fulfill the secret Santa’s wishes.

They asked Officer Davenport to find five worthy people.  Davenport recently gave a woman who was accused of stealing diapers money  to go buy diapers for her baby. After giving away the money from the secret Santa, Davenport said it was so rewarding, he wanted to empty his bank account and do it all over again.  One woman was moved to tears after receiving the money.

Officer Pak helped out a man with an expired registration and a check engine light on, who was taking his children for Christmas dinner at Denny’s and said he couldn’t afford repairs.  Officer Wining pulled over a woman with a broken taillight; instead of a citation, he gave her money to help pay for the repair. Officer Mahanty gave $20 to a woman with children to help them buy groceries for their holiday meal. 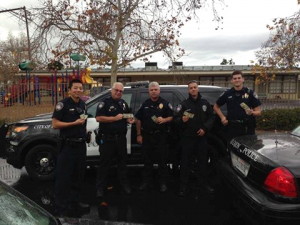 Two gifts rewarded good deeds.  A man in a Santa hat and beard was rewarded by Officer Peterson after the man stopped to save a stray dog and returned it to its owner.  Another went to a woman who used three crosswalks to safely cross an intersection; she was chosen to draw attention to the importance of pedestrian safety, since El Cajon has had several pedestrian fatalities.

Officer Howard noted that too often on Christmas, officers spend their time answers calls about domestic violence or disputes over gifts.  “We are humbled to have been given this opportunity to spread Christmas cheer!” he wrote on the El Cajon Police Officers Association Facebook page, where photos are posted showing joyful recipients of the unexpected holiday greenery.

Another post concludes, “As you celebrate your Christmas evening, these fine officers will be patrolling the streets, keeping everyone safe!”