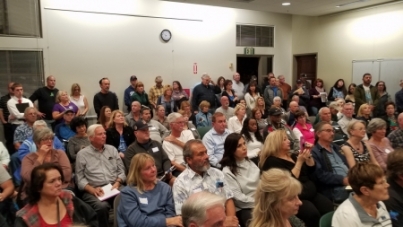 December 5, 2018 (Rancho San Diego) -- If a large contingent of residents in Rancho San Diego and Jamul have their say, a proposed sand mine in their community won’t get built. Over 200 residents opposed to a sand mining project that would replace Cottonwood Golf Course on Willow Glen Road engulfed the meeting room at the Rancho San Diego Library last week, overflowing into the lobby and onto a patio.

Public comments and a petition

Initial public comments are being accepted until December 19th by the County’s Land Use Environmental Planner, Bronwyn Brown, at Bronwyn.Brown@sdcounty.ca.gov as part of the official scoping process.

Barry Jantz, spokesperson for the opposition, told the crowd that a petition to gather signatures against the project is available for printing and circulating at the website www.StopCottonwoodSandMine.com. The group circulated a flyer and asked that petitions be submitted to the Stop Cottonwood Group by December 15th.

Jantz (photo, left) also urged concerned citizens to sign up at the site to receive notices of future meetings and comment opportunities. The project could take months or years to work its way through the county approval process and multiple letter-writing efforts will be encouraged, he added. 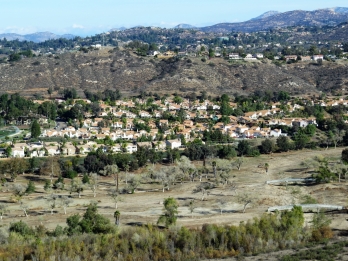 The proposed sand mine comes on the heels of Beverly Hills-based investor Michael Schlesinger purchasing the failing Cottonwood Golf Course in 2015. The golf course filed for Chapter 11 bankruptcy reorganization in 2011.

But as the general public’s interest in golf has ebbed, the golf course has curtailed its operations to 18 holes, allowing one course to go fallow, ponds drained, grass brown. (photo, right) Schlesinger also owns the failed Poway Golf Course which he purchased in 2013 after it fell into foreclosure, as well as yet another failed golf course in Escondido.

Over the years, the Cottonwood Golf Course has become home to not only area golfers who have relished the area’s semi-rural atmosphere and mountain views, but also to local wildlife that has utilized the course’s water features due to the site adjoining the San Diego National Wildlife Refuge along the Sweetwater River.

In order to recoup his investment, Schlesinger wants to convert the golf course into a 10-year sand mining operation in an attempt to profit from the regional building industry’s shortage of sand aggregate. His proposal would produce an estimated 3.8 million cubic yards (7.5 million tons) of aggregate over a span of 10 years and potentially put up to $40 million dollars into his pocket. The project would be developed in three phases. Once each phase is completed the area would be rehabilitated, according to Schlesinger’s proposal.

Some have estimated that Schlesinger could spend some $8 million on vetting the project before it even appears as an agenda item before the San Diego County Board of Supervisors. First, it must be heard by the advisor Valle de Oro Planning Group and later by the County Planning Commission.

According to preliminary plans developed by the San Diego-based environmental consulting and development company EnviroMINE, the extraction and processing of sand would happen between 7 a.m. and 5 p.m. Monday through Friday, and trucking of the mined aggregate would take place between 4 a.m. to 6:30 a.m., and also from 9:30 a.m. to 3 p.m.

A rock quarry located east of Cottonwood Golf Course, which has been in existence for nearly half-a-century, is considered by many residents to be as a public nuisance. One resident with a home overlooking the golf course told EMC that when blasting is done at the quarry, “My whole house shakes.” 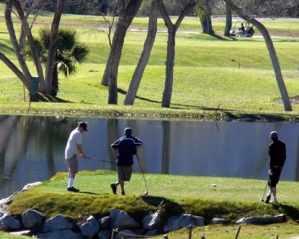 Bill Asmar, a local resident opposed to the Cottonwood project, said at last week’s meeting, “I am here like everyone else here tonight. We are concerned about this project. I moved into this community because of the peace and quiet--not to be living next to an active sand mine.”

“We know and are aware that sand is needed for the community’s building needs,” says the group’s organizer, Elizabeth Urquhart. “But it doesn’t have to come from an area that is so close to residential homes, county parks and several schools.”

Photo, right:  Cottonwood Golf Course provided attractive views to neighboring homes before this course was fallowed, with a proposal to mine sand at the site.

Jon Cloud (photo, left), whose family has been involved in mine development in the area since the 1940s, has been designated as a spokesman for EnviroMINE. He stated during a joint interview with East County Magazine and the San Diego Union Tribune, “I understand that people are in fear of change. I think it’s incumbent upon us to paint the picture, show them what the ultimate outcome will be of that change.”

He continued, “I know that we’re not going to assuage all of their fears, but we can back them off from the ledge. So you don’t need to jump because the impact is not near what you’re envisioning.”  He claims sand mining would be less disruptive than an existing quarry nearby and argued that all cities need sand for roadways and construction.

More potential impacts of the project

Rancho San Diego resident Elizabeth Urquhart, who is organizing the effort against the sand mining project, addressed Cloud’s public assertions that the community should “dial it back” when it comes to community concern over the project. “He says that we haven’t seen the latest revisions to the projects and that our minds might change,” she says, but adds, “Our concerns remain the same. How can he even say that when he hasn’t seen any revised maps or proposals himself? The project will still affect the homeowners, schools, and other community facilities.”

Property values is another legitimate concern. A current survey of homes for sale adjacent to the 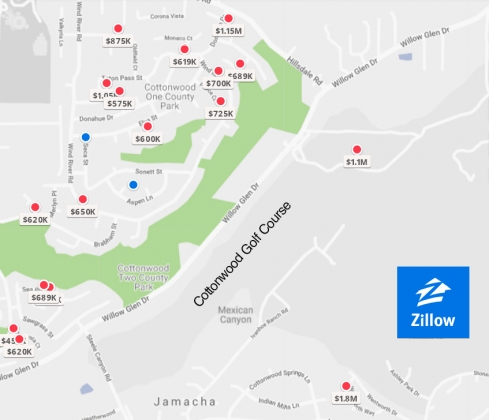 Cottonwood Golf Course on Willow Glen Road listed on the Zillow website show homes for sale in the range of $600,000 to $1.5 million. Several real estate agents contacted by ECM say that the project, if approved, could mean a severe depreciation in values.

The site is zoned recreational, and further the golf course is listed as a buffer zone to sensitive wildlife habitat in the adjacent federal refuge.

Urquhart encouraged the citizens attending the meeting to engage in a letter writing campaign to members of the San Diego County Board of Supervisors to reject the project. She reminded them, however, that members of the board are legally not allowed to express any opinions until the measure is before them for a vote and all public testimony has been heard. She reminded those present that it will be some time before the project goes in front of the board as there are numerous steps in the approval process, including an environmental impact report and the federal government weighing in on the project.

The opposition group is also seeking people with expertise in specialties ranging from biology to real estate to help draft responses as the project proceeds.