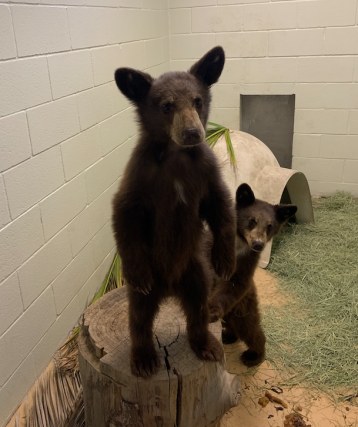 The bears had been seen without their mother and getting too close to humans — even being fed by people in the neighborhoods. For their own safety and the safety of the public, CDFW captured the cubs.

“These two cubs are definitely too young to survive on their own without their mother,” said Christine Barton, director of operations & wildlife rehabilitation at San Diego Humane Society’s Ramona Campus. “We are thankful that the California Department of Fish and Wildlife was able to capture them when these two orphans began approaching people. It typically doesn’t end well for humans or animals when people begin feeding wildlife, regardless of age.”
While at the Ramona Wildlife Center, the Project Wildlife team will provide a safe environment where the bear cubs can practice their natural skills and get the proper nutrition they need to grow and eventually be released back in the wild where they belong.
San Diego Humane Society’s Project Wildlife program is the primary resource for wild animal rehabilitation and conservation education in San Diego County. Each year, SDHS gives nearly 13,000 injured, orphaned and sick wild animals a second chance. In 2020, SDHS announced a new Ramona Campus, where they specialize in caring for native apex predators and birds of prey, including hawks, owls, eagles, coyotes, bears, bobcats and, under special pilot authorization, mountain lions.