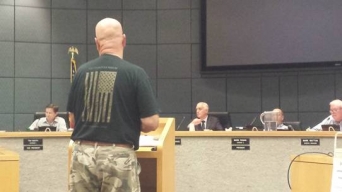 October 6, 2017 (Spring Valley) — The Otay Water Board approved the rates and charges for the 2017-2018 fiscal year, as well as a five-year authorization of cost-increases up to 10 percent. The board passed the rate changes in a 4-1 vote on Wednesday, Oct. 4 following a public hearing at its headquarters in Spring Valley.

The measure was an overhaul of the previous rates in order to comply with Proposition 218, which prevents local governments from over-charging citizens, by mandating cost-based rates. The system fees for residential owners will collapse from four tiers to three as the conservation tier is eliminated. The plan moves commercial, public and irrigation customers from tiered variable rates to unitary variable rates.

For this year, the net change in water rates is zero. The average residential water rates will decrease. However, those in tier one who use the least amount of water will have their bills increase the most. Without a conservation tier, the incentive to save water will likely fall.

In the coming years, rates will be changed and reauthorized each year following a public hearing, although they do not have to give the same extent of public notice they did this year because of the pass-through of rate increases. Mailings to individual households will not be done with each annual adjustment, though any rate decisions will be made in public hearings that will be noticed on the district’s website.

Although rates can rise up to 10 percent, it's predicted they will only rise five percent  before 2023.

Before public comments began, the staff presenter touted that Otay has the third lowest water rate in the county for the average household, with only Lakeside and San Dieguito less.

In the quiet room filled mostly with administrators, only one community member spoke to the board. Sharon Quinn shared her struggles with retiring and being on a fixed income while many utilities continue to increase in cost faster than the rate of inflation. Her water bill tripled in 13 years. “Even if I cut usage, the rates will increase if everyone does so to cut costs,” said Quinn, “I feel sort of powerless to economize on my bill.”

Director Gary Croucher director listened to Quinn and indicated he believed Otay is run as efficiently as possible, but that the arbitrary hikes from California Water Authority (CWA) were detrimental to the district— which has no reservoirs or groundwater to use. He  views the board as creating efficiencies in bureaucracy and calling out the hypocrisy in the CWA.

The board commiserated with her struggle and many stated they joined the board to defend people like her.

When discussion began, board Member Mitch Thompson stated he was sure the changes were defensible, but not enough had been done to see how to lower costs for those living in small, older homes who likely need cost cuts the most. “The ones doing a really good job (saving water) are the ones most affected,” Thompson said. He voted against the measure.