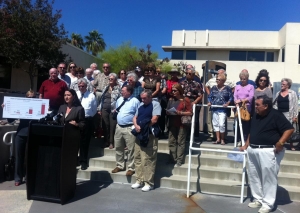 August 12, 2011 (Otay) – By a 4-1 vote, the Otay Water District Board of Directors on Wednesday approved free lifetime healthcare for retirees and their dependants. Director Mark Robak cast the sole “no” vote.

A coalition of business and community leaders voiced opposition to the measure. Ratepayers, along with members of the San Diego County Taxpayers Association, staged a protest outside the meeting. SDCTA has called the action “outrageous” at a time when ratepayers have seen double-digit rate hikes.

“Despite district claims the proposal is cost-neutral, SDCTA’s analysis shows it would increase its unfunded liability by 2,340%, or almost $5 million,” a press released issued by SDCTA states. “The deal is self-serving and completely irresponsible. The District’s spin on the purported savings is blatantly dishonest.”

After the vote, opponents expressed disappointment, with some suggesting a recall election may be in the pipeline for water board directors who approved the benefits package. Additional background and a copy of SDCTA’s own fiscal analysis of the proposal is available at www.sdcta.org.

Otay Water District General Manager Mark Watton, however, has issued a statement defending the action and clarifying what he suggests have been misinterpretations in some media accounts.

"With respect to the amendment to benefits for the District’s unrepresented employees, it is important that the following facts are fully known," he states in a post on the District's website, which lists the following four points:

1. This agreement is an amendment to a 5-year contract made 3 years ago with unrepresented employees for cost of living increases. These employees have chosen not to receive their cost of living adjustments in the form of a cash raise. Instead, they chose to divert the raises that this agreement entitled to them directly into a health benefits plan.

2. There is no additional cost to the District for this amendment. In fact, it results in a cost savings of over $30,000 each year.

3. The District relies upon reports from the actuary of its pension system, whereby trends, forecasts, and data analysis are extensively studied to determine the fiscal soundness of this action. No information was brought forward that would indicate that this benefits amendment is not of sound practice.

4. The District continues to deliver water resources to its ratepayers at amongst the lowest rates in the entire county, and we have every expectation that we will continue with this trend.