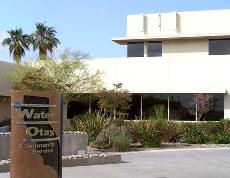 Water agencies and community leaders take a stand against proposed water rate increases
March 14, 2012 (Spring Valley) – On Monday, Otay Water District’s (the District) Board President, Jose Lopez, and General Manager, Mark Watton, joined elected officials, business leaders, other public water utility representatives, and the San Diego County Water Authority (CWA) to protest proposed water rate hikes and the rate-setting structure of the Metropolitan Water District. MWD has raised its rates by 75 percent since 2006.
“Our ratepayers are suffering from rate fatigue,” said Jose Lopez, Board President. “MWD needs to be just as concerned as we are with the fact that our more than 208,000 ratepayers are suffocating under the weight of the rate increases.”
Click here for the full-length statements from Director Lopez and Mr. Watton.
Since 2010, the CWA has had active litigation against MWD’s rate structure. Allegations against MWD include the assertion that San Diego pays an unfair amount for water because transportation costs are disproportionately weighted into the overall cost.  The details of the other allegations can be found on a website dedicated to the issue here.
While the District has been tirelessly seeking out ways to reduce operational costs, maximize efficiencies and minimize the impact of water rate increases on its customers, MWD has not placed the same value on efforts to save. The CWA has uncovered an array of MWD processes that work against any cost-saving efforts on the agency level – most recently, they uncovered the existence of a secret group making up the minds of the MWD board (see “SD water officials decry 'secret society' of agencies” – SD Union Tribune, Monday, March 12).
“The District has been diligent in cost-saving measures within our operations and staffing to maximize efficiencies and reduce the impact of rate increases to our customers,” said Mark Watton, General Manager. “It is only fair that MWD demonstrates the same commitment and effort.”
The MWD Board will take the public comments into consideration this month when voting on the proposed 7.5 percent and 5 percent rate increases for fiscal years 2012 – 2013 and 2013- 2014, respectively. If the rates increases are approved, water rates increases will equate to a 101 percent cumulative increase since 2006.

For more information about the Otay Water District, visit www.otaywater.gov.