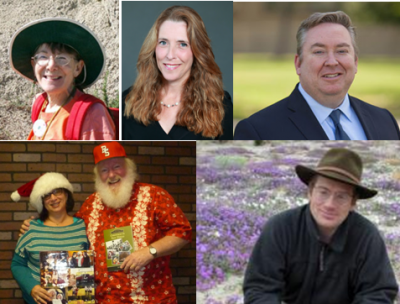 Our December 2015 radio shows are now online!  You can listen online now (sound files may take a minute to load). For links to listen to the shows plus a full list of topics and interviews in December, click here and scroll down.

Our newsmaker interviews included climate scientist Jeffrey Severinghaus of Scripps Institute, Assembly candidate Mike Harrison, authors Caitlin Rother (Then No One Can Have Her) and Bill Swank (Christmas in San Diego), geologist Norrie Robbins on her efforts to bring science to kids on Native American reservations, and Jawdat Al Obeidi on a Chaldean youth conference, plus some “best of East County” reruns including some holiday favorites.

Audio files to listen to shows are at the bottom of this page, below the index of shows.

Bookshelf: Caitlin Rother, author, on her new book The No One Can Have Her

CA is worst in nation on homelessness (Public News Service)

Inmates to help in El Nino

Bookshelf: Bill Swank, aka Santa, on his book Christmas in San Diego

Sheriff’s You Are Not Alone (YANA )volunteers help seniors

‘Twas the Night Before Christmas in East County

David Dickens on his ancestor’s famous work, A Christmas Carol