Photos by Bob Scheid, shortly after the West Fire began, helped us provide critical early warning to our readers

July 9, 2018 (Alpine) – In the critical first few hours of the West Fire in Alpine, our East County Wildfire & Emergency Alerts provided the earliest news that a fire had begun and was threatening homes in Alpine. In the first 12 hours, we posted 38 updates including Twitter, email, articles and social media.

During the fire’s first day, our first alert was sent at 11:44 a.m (simultaneous to the Forest Service's first Tweet five minutes after the fire was reported at 11:39 a.m., per Cal Fire's incident report). That was nearly an hour and a half before the first Cal Fire and County Fire Authority Tweet at 1:04 p.m.  and a full four hours before the first Cal-Fire e-mail alert went out at 3:43 p.m. announcing “numerous structures destroyed.”

Alpine Fire Department, battling the inferno amid power outages and grappling with a seriously injured fire captain, didn’t get their first Twitter alert out until the next day.  Cleveland National Forest did send timely alerts via Twitter only, but stopped after the fire burned outside of federal lands and into neighborhoods with homes.

During the first 12 hours of the fire, we sent frequent updates via Twitter and email, as well as posting numerous updates on our webpage plus photos and video link. We even went the extra mile to post some information on our Facebook page and on some community forum Facebook pages in or near the Alpine area, where many were without power but could access those sites on cell phones. 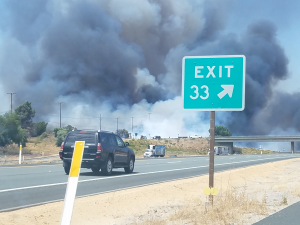 In addition, we alerted on multiple other fires include a blaze in Dulzura that forced evacuations and burned a home, a fire over 1,000 acres near Camp Pendleton that forced 750 evacuations, and a fire near Scripps Ranch/Miramar.

Below is the chronology of each agency and organization’s alerts during the first 12 hours of the fire, published not to criticize other agencies (the Alpine area suffered burned power lines and outages, as well as downed cell phone service for some carriers, that may have impeded some services.)

The point of this story is to show the importance of signing up for multiple alert services.

We are deeply appreciative to Grossmont Healthcare District for supporting our alerts to keep you safe and informed.  We are seeking additional future sponsorships as the frequency and cost of fires grows.

If you value our alerts, please consider a donation or sponsorship. (see details below this article.)

COMPARISON OF ALERTS: FREQUENCY AND TIMELINESS ON WEST FIRE DAY 1

11:44 a.m. Our first Twitter alert went out based off an eyewitness who sent us photos of flames encroaching power lines, who called to warn us that he was worried the fire could reach mobile homes. We confirmed the fire’s rough location off the CHP website reporting it off I-8 west of Willows. No other news service even came close to notification this early, though Cleveland National Forest did send its first tweet out at approximately the same time.

12:17 p.m. We tweeted that the Sheriff in Alpine was urging mobile home park residents near Albertson’s to evacuate immediately and that at least one structure had burned.

We sent 24 more tweeted or retweeted messages via Twitter on that first day and evening, July 6, with information including the fire’s size and containment rates, temporary and overnight evacuation centers, freeway and road closures, location of large animal shelter and places to shelter pets, power outages and estimated restoration times, a boil water order, a map of the fire, number of homes burned, photos and videos of the fire, and more.

12:05 p.m. Our first e-mail alert was sent warning people of fires in both Alpine and Dulzura.

2:42 p.m. We emailed that the freeway had closed, other roads were closured, the fire was 350 acres, temporary and overnight shelters were set up, and Lakeside Rodeo was taking large animals.

Later alerts included notification of fires in Pendleton and Scripps Ranch, plus additional details on the earlier fires.

We posted our first article on the Alpine fire at 12:09 p.m.

We posted a final story at 1:30 p.m. with preliminary reports on some damage and updates on road closures/roads reopened.

First tweet was sent at 11:44 a.m.  advising the fire was 150 acres n unified command with Alpine Fire District, Cal Fire and Cleveland National Forest.  Several updates were sent, with the last advising that Cal Fire was taking over command at 8 p.m.

Cal Fire and the County Emergency Services sent their first tweet jointly at 1:05 p.m.  announcing a vegetation fire near I-8 and West Willows Road.

Cal Fire did not send its next update until 3:43 p.m. after many homes had burned and the fire was 350 acres.

Cal Fire and the County Fire Authority did send several updates, mostly by Twitter, later in the day advising of the fire’s growth, shelter locations and road closures.

No tweets were sent on the first day of the fire, July 6.  On the morning of July 7, Alpine Fire retweeted Cal Fire posts starting at 6;12 a.m., long after many homes had burned.

Who to follow for emergency information:  Every fire is different, and no one agency is superior in every situation.  We recommend signing up for all of these:

also visit our news site at www.EastCountyMagazine.org and East County Magazine on Facebook, where we post major stories during emergencies.

Nixle:  http://www.nixle.com/  Put in your zip code for options to sign up for alerts from your local law enforcement agency, (important, since the Sheriff issues evacuation notices as well as crime alerts), as well as severe weather and traffic alerts.

SUPPORT OUR ALERTS!   If you value our efforts to keep you informed during the fast-moving West Fire that scorched over 500 acres and destroyed at least 34 homes, please consider a donation to support our nonprofit’s efforts to keep you safe and informed. Donations can be sent to East County Magazine, 4438 Hideaway Place, La Mesa, CA 91941 and write “wildfire alerts” on the designation line at the bottom of your check.

SPONSOR OUR ALERTS! We are grateful to the Healthcare District for their title sponsorship of our alerts from Aug. 2017-Aug. 2018.  We are looking for additional sponsors to fully cover costs that are rising as fires become larger and more frequent. For sponsorship information, call 619-698-7617 or email editor@eastcountymagazine.org.

The West Fire was reported to Heartland Fire Communications at 11:22 a.m. A "High Wildland" resource was quickly sent to the closest available fire stations and units. The U.S.F.S Cleveland dispatch also put together a resource assignment as the fire was initially in their jurisdiction. It sounds like Calfire was the third one to assign resources. The first arriving S.D.Central Zone agencies (in order) were: Viejas, Alpine, Lakeside, Barona, San Miguel. The initial IC (Viejas) immediately ordered additional Central Zone strike teams eventually totaling 15 type-I engines and 4 chief officers. Eventually, all nine S.D. Central Zone agencies (Alpine, Lakeside, San Miguel, Heartland, Barona, Sycuan, Viejas, Santee, Bonita) had resources assigned to the incident. As for social media, Lakeside Fire's twitter feed reported the fire at 11:40 a.m. and posted a photo at 11:49 a.m. After then, things got a little too busy. https://www.google.com/maps/d/viewer?mid=1gulJwIgOMh2a5LGwQR6uXvEbL-s&ll=32.80335838215376%2C-116.86507255000004&z=11
Couldn't open it, even cut-and-paste.

is that everyone gets "too busy" to notify the public or the press about the fire's rapid growth.  Every agency should have someone whose job is to alert the media and send at least a tweet out to everyone who follows that department, but beyond that we need coordination with the county alert service to get them moving faster.  Most folks aren't following Cleveland National Forest or Lakeside Fire (if they din't live in Lakeside). Alpine residents didn't even get a notice from Alpine Fire.  Cal Fire waited until it burned into their terroitory .  Meanwhile lots of homes burned down.  I love to hear a better idea if someone has one. Also in some fires the power lines or cell towers go down, as with the Border Fire when CAl Fire was in a dead zone.

Interesting that the fire was reported to Heartland at 11:22 so why did Chief Mecham say it started over 15 mintes later, and that homes were burning within 8 minutes?  or was that really 23 minutes?

Another thing a lot of readers are asking is why it took so long to get planes there. I know theer was a fire in Dulzura which thankfully got put out fast, but how with only 2 fires burning that morning were there not enough resources to fight this one?  Seems like there's not enough positoned here.