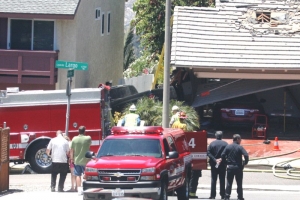 July 3, 2010 (Del Cerro) – A driver who lost control of her pickup truck Thursday missed a turn on a steep downhill road, then crashed into two homes in the 6200 block of Camino Largo near Ridge Manor Avenue. The truck entered the garage of the first home, damaged an electrical sub- panel and started a fire.

The vehicle then broke through the garage wall and jumped over a property line, slamming into a neighbor’s garage wall. 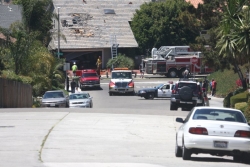 San Diego Fire Department, SDG&E and the San Diego Police Department handled the incident. The fire was contained to the first home. Firemen removed roofing tiles and poked holes into the roof to extinguish the garage fire.

Authorities said the driver, possibly under the influence of drugs or alcohol, appeared to have lost control of the vehicle. She was seriously injured in the crash and was taken to the hospital.