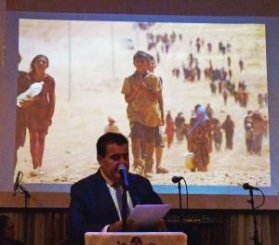 Photo, left:  Noori Barka speaks as slideshow depicts Iraqi Christian refugees forced to walk across the desert, fleeing their homeland to escape ISIS terrorists with nothing but the clothes on their backs.

September 4, 2014 (ElCajon)--Community members and religious leaders came together on August 27  in El Cajon at a fundraiser to help save Christians in Iraq who have fled their homes to escape 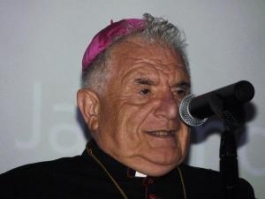 the Islamic State imposed by ISIS terrorists.  ISIS is systematically massacring Christians and other minorities who refuse to convert to Islam.  The event, which was emceed by KCBQ radio host Mark Larson, raised over $588,000.

Bishop Sharhad Jammo (photo, right) has pledged to personally  travel to the Middle East to deliver the donations, despite grave dangers in the region, where Christian religious leaders have been kidnapped, tortured and murder. 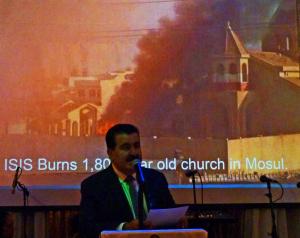 Mark Arabo, a national leader of Iraqi Christians, told East County Magazine that the event represented the good will of the people of San Diego.  “We all came together for a purpose: ending a genocide and giving hope to the hopeless,” he said. “We will continue to pursue our journey to save 400,000 Christians.”

Noori Barka spoke about the plight of those forced to flee their homes, showing a slideshow with images as evidence of the suffering, including the burning of an 1,800 year oild church in Mosul by ISIS (photo, left).

Last weekend, Bishop Jammo spoke at Skyline Church, moving many of the evangelist church parishioners to come to the fundraiser and donate to help Iraqi Christians. 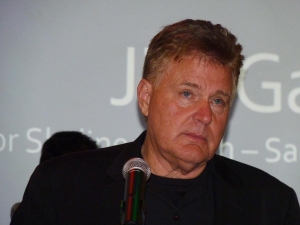 shared chilling details about the brutal treatment of Christians at the hands of ISIS forces, who first humiliate, then kill their victims.  Some of the killers boast of collecting women’s body parts; severed heads have been used as footballs , said Garlow.

He ended his talk by recalling President John F. Kennedy’s visit to the Berlin Wall, when Kennedy showed solidary  in standing with all Berliners.  “Tonight, I am a Chaldean,” concluded Garlow, then repeated it in Aramaic  to thunderous applause.

Donations to the Minority Humanitarian Foundation made be made at http://minorityhf.org/ .