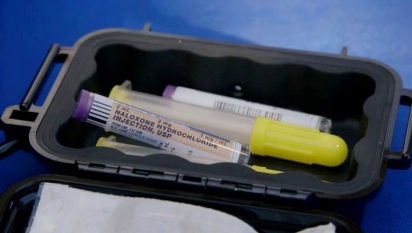 November 29, 2016 (San Diego) -- Since 2014, 37 people owe their lives to a San Diego Sheriff’s Department program in which deputies carry and administer a lifesaving drug to people overdosing on opioids such as heroin, morphine, or oxycodone.

“Ideally, we’d like to see this type of drug carried by all the first responders throughout the county to help save lives,” said sheriff’s Capt. Todd Richardson. “That would be the goal of the Sheriff’s Department: to encourage this program and save more lives.”

The department is the only local law enforcement agency in the County to carry the drug, but other local police are looking at carrying it in the near future, Richardson said.

A person overdosing on opioids such as heroin or morphine will gradually stop breathing without intervention. They may become pale, cold and clammy, go limp, or lose the ability to speak or awaken. The person’s fingernails and lips may turn blue or purple or they may start vomiting and make gurgling noises.

If these symptoms occur, they need immediate medical attention. More specifically, they need a quick dose of an opioid inhibitor such as Naloxone, which immediately counteracts the depressant effect and allows the person to breathe on their own.

Every year Sheriff’s deputies are the first to arrive on scene, ahead of paramedics or firefighters, in approximately 150 overdose cases, said Capt. James Bovet. In July 2014, the San Diego County Sheriff’s Department began a 6-month pilot to train deputies from an East County station to carry and administer the lifesaving nasal spray drug. In those months, the drug was used 15 times. Fourteen of the people who received it survived.

“We spray it and it immediately reverses the degree of the opiate. Respiration and pulse increases,” said Bovet.

The program’s high success rate resulted in the Sheriff’s Department expanding the program. In the nearly two years since, as of Nov. 20, it has been used another 29 times, of which six patients did not survive and 23 were saved, said Richardson.

The drug is currently carried by every Sheriff’s patrol unit, as well as units assigned to courts, schools and other details. Richardson adds there are probably a couple hundred of these kits in the communities they serve at any given time.

In order for deputies to have a chance at saving a life, someone has to call 9-1-1 to report the medical emergency, and they need to begin CPR if the person has stopped breathing. But often, a person with the patient who is overdosing may also be under the influence of drugs and is likely afraid to call for help for fear of being arrested. The patient or caller won’t be arrested in those circumstances, Bovet said.

A good Samaritan law, Assembly Bill 472, passed in 2012 that says law enforcement can’t arrest someone for being under the influence of, or in possession of, an illegal narcotic if the person is calling for help for an overdose, whether it’s their own or someone else’s. Bovet said the exception would be if someone was selling narcotics, had administered the drug without the person’s consent, was driving under the influence or was in violation of probation or parole.

The UC San Diego School of Medicine began a study in May of this year to monitor whether people would be more likely to call 9-1-1 for help knowing that deputies carry this lifesaving drug.

As part of the sheriff’s Naloxone program, a brochure was developed that refers people to an opiate abuse treatment center and how to apply for help, said Bovet.

The County funds drug prevention and treatment services throughout the region. Treatment is available by calling the County’s Access and Crisis Line at (888) 724-7240.

You could save the life of a friend or family member by taking classes from the American Red Cross.
http://www.redcross.org/phssux/desktop.results.jsp?type=class-type-class...