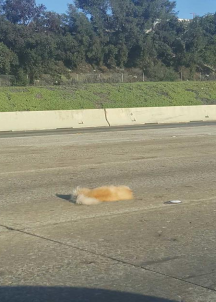 January 2, 2017 (San Diego’s East County) – A woman who tried to save a dog yesterday morning that was later fatally struck by a vehicle on State Route 94 near the Broadway/College exit is trying to find the dog’s owner.

According to Angela Foster’s post on the Next Door Mt. Helix discussion forum, she saw the dog running against traffic around 8 a.m. on New Year’s morning.

"I pulled over on the median and called him/her to me,” she wrote. “He ran away from me and down the freeway. I called 911 and I cut across all the traffic lanes, got off the freeway and back on at Federal trying to head him off. Unfortunately, another driver was unable to stop.”

Foster says she pulled over to try and help the animal after it was struck, but couldn’t reach the dog to pick it up or check tags because of heavy, fast-moving traffic.

“He didn't move at all as the cars whizzed by. I'm pretty sure he didn't suffer and his passing was quick,” she adds.

“I called 911 back and cried with the operator. She said an officer was on the way and I should get back on the road. I'm so sorry, I really tried,” she concludes. “Rest in peace beautiful, small fluffy golden dog.”