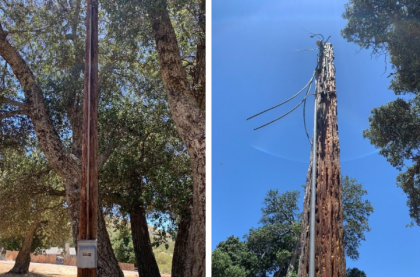 But now the owner, Anthony Windle, contends that the county acted improperly. Windle says the inspector relied on a county code, but he believes that state law supersedes the local codes and would allow the changes he’s made.

Donna Durckel, the County’s group communications officer for Land Use and Environment, previously told ECM that Windle secured a county permit for replacement of existing electrical pedestals on the RV campground.  But she said, “Inspectors found that additional electrical pedestals were installed, which is beyond the scope of his permit. Mr. Windle will be required to remove those improvements that were not included in the permit.” (The County is disputing my ability to repair the electrical to each space. We only installed the pedestals that were included in my permit)
Windle said the park was originally approved back in the 1960s and as a 45-space RV park with full hookups for water, sewer, and electrical. The site also has a permit for  26-space mobile home park, as county records confirm, ECM has verified. So even though in recent years it’s been used mainly for short-term vacation stays, Windle told ECM, “I am perfectly within my legal right to repair both properties to their full legal use based on when they were originally approved by the County of San Diego and the state of California.” He added, “Do you think I’d spend $50,000 to $100,000 if I thought the County would just make me rip it all out?” 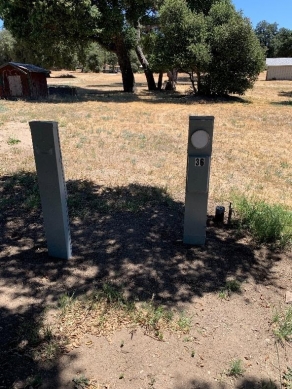 Photo, right:  Legacy electrical hook ups in RV section
Windle had another meeting with county representatives this week and remains hopeful he will prevail.
He points to California’s Mobile Home Parks Act under Division 13, part 2.1 of the California Health and Safety Code – specifically:
HSC 18300 (a) State Code Applies over County and Local Codes and 18300.
(a) This part applies to all parts of the state and supersedes any ordinance enacted by any city, county, or city and county, whether general law or chartered, applicable to this part. Except as provided in Section 18930, the department may adopt regulations to interpret and make specific this part and, when adopted, the regulations shall apply to all parts of the state.
HSC 18300 (g) This section describes when Local Codes apply over state Code
(g) This part shall not prevent local authorities of any city, county, or city and county, within the reasonable exercise of their police powers, from doing any of the following:
(1) From establishing, subject to the requirements of Sections 65852.3 and 65852.7 of the Government Code, certain zones for manufactured homes, mobile homes and mobilehome parks within the city, county, or city and county, or establishing types of uses and locations, including family mobile home parks, senior mobile home parks, mobile home condominiums, mobile home subdivisions, or mobilehome planned unit developments within the city, county, or city and county, as defined in the zoning ordinance, or from adopting rules and regulations by ordinance or resolution prescribing park perimeter walls or enclosures on public street frontage, signs, access, and vehicle parking or from prescribing the prohibition of certain uses for mobilehome parks.
(2) From regulating the construction and use of equipment and facilities located outside of a manufactured home or mobile home used to supply gas, water, or electricity thereto, except facilities owned, operated, and maintained by a public utility, or to dispose of sewage or other waste therefrom when the facilities are located outside a park for which a permit is required by this part or the regulations adopted pursuant thereto.
(3) From requiring a permit to use a manufactured home or mobilehome outside a park for which a permit is required by this part or by regulations adopted pursuant thereto, and require a fee therefor by local ordinance commensurate with the cost of enforcing this part and local ordinance with reference to the use of manufactured homes and mobile homes, which permit may be refused or revoked if the use violates this part or Part 2 (commencing with Section 18000), any regulations adopted pursuant thereto, or any local ordinance applicable to that use.
(4) From requiring a local building permit to construct an accessory structure for a manufactured home or mobile home when the manufactured home or mobile home is located outside a mobile home park, under circumstances when this part or Part 2 (commencing with Section 18000) and the regulations adopted pursuant thereto do not require the issuance of a permit therefor by the department.
(5) From prescribing and enforcing setback and separation requirements governing the installation of a manufactured home, mobilehome, or mobile home accessory structure or building installed outside of a mobile home park.
Windle states,”The state code allows local authorities to establish zones for mobile home parks. Other than establishing Zones for MobileHome parks the local codes do not apply inside a MobileHome park. The County has many invalid zoning ordinances with respect to mobile home parks.“
He points to a civil lawsuit, Santa Cruz vs. Waterhouse, as a precedent affirming the preemptive nature of the Mobile Home Parks Act (MPA). 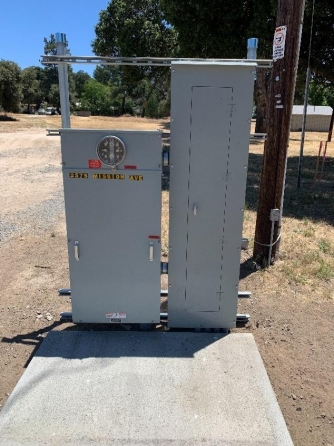 Photo, left:  replacement 400 amp main with replacement RV pedestals
The issue in that case was whether or not it was legal for a county to require local planning approval for installation of multi-story mobile homes.   The judge wrote in his decision, “We conclude based on the specific language of section 18300 et seq., including the provisions that specifically state that the MPA preempts local legislation, as well as those provisions that allow limited local regulation,  that the MPA preempts the ordinance in this case.”  The judge further notes that statewide standards are needed, since without this, “a mobile home owner would be subject to the specific and particularized whims of a local county or municipality and would in effect be hampered in his or her ability to move the mobilehome within the state.”
Windle also cites Title 25, specifically sections 1116 and 1018, which allow six inches of grading without a permit (load bearing) and 12 inches of grading (non-load bearing), also requiring owners to maintain clearance.
“The stop order issued by the County is contradictory to the allowed grading and clearing on the property,” Windle contends. “Once again, the County is trying to enforce local codes on the  park when clearly the MPA is preemptive. Not only is the grading and clearing allowed, it’s actually required.”
Windle says he grew up in a mobile home park where he helped do everything from dig ditches to build fences, and has been in the mobile home park business for decades.
“At the end of the day, all I want to do is provide affordable, quality housing,” he says, “and all I’m getting is pushback.  Every day on the news, all I hear about is the affordable housing crisis.”
Windle says he owns several local mobile home and RV parks.  “Live Oak Springs is probably my worst property and I just bought it in the middle of the pandemic.”  Ultimately, he says he  hopes his upgrades will transform the property to be “amazing and beautiful.”
He says he would like to work with the community and does have support from some residents, but has faced opposition from others.
The property he purchased in Live Oak Springs does not include the restaurant and store.  But it does include cabins and an off-road racing practice track that might be used for community events.
He hopes to give back to the community, if he is able to repair the property to its full legal use.
“One of my ideas is a community garden, and a Halloween corn maze,” he adds. “I’m open and I want to be a valued member of the community, as opposed to a pariah.”
He fears he may be typecast due to problems caused by a prior owner of the property. That prior owner,Nazar Najor, also owned the Live Oaks Water Company; he was fined and the water company put into state receivership due to serious violations that put public health at risk. The Live Oak Springs Resort owned by Najor went into bankruptcy before it was purchased by Nick Nissou, who in turn subdivided the property, kept the restaurant and store, and sold the rest to Windle.
“It takes time for people to realize my intentions are good,” Windle concludes. “The proof is in the pudding. Watch what I do in ten years, and then you can judge me.”
ECM has reached out to the California Department of Housing and Community Development regarding the code interpretation issue, and will publish a response when received.